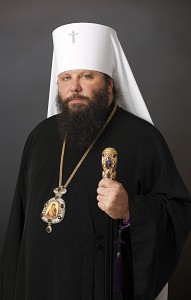 Bishop Nicholas (Olhovsky) was born on December 17, 1974, in Trenton, NJ. He graduated from St. Alexander Nevsky Russian Parish School in Lakewood, NJ in May 1991, and in 1993, graduated from Hamilton West High School. In 1998, he graduated from Holy Trinity Seminary in Jordanville, NY, where he received a Bachelor of Theology Degree. During his studies in seminary, he executed his obediences in the book-binding shop, icon studio, and typographical workshop (working in the latter until 2002). On the feast day of the Dormition of the Most Holy Theotokos in 1994, he was ordained a reader by Bishop Hilarion of Manhattan, vicar of the Eastern American Diocese (today First Hierarch of the Russian Church Abroad), in Trenton’s Dormition Church. In 2000, he graduated from the State University of New York Technology School, receiving a Bachelor’s Degree in Information & Communications. From March 1999 to March 2008, he served as cell attendant to Archbishop Laurus (Skurla; from October 2001 to March 2008, Metropolitan).

Fr. Nicholas Olhovsky’s monastic tonsure was performed on April 4, 2014 in Holy Trinity Monastery in Jordanville, NY. In tonsure, Fr. Nicholas was given the name "Nicholas" ‒ in honor of the Holy Hierarch Nicholas of Japan. At Divine Liturgy on April 27, the second Sunday of Holy Pascha, in the presence of the Kursk Root Icon of the Mother of God and in accordance with the resolution of the Synod of Bishops, Archbishop Mark of Berlin & Germany elevated Hieromonk Nicholas to the rank of archimandrite in Holy New Martyrs & Confessors of Russia Cathedral in Munich.

The Rite of Nomination and episcopal Consecration were performed in Joy of All Who Sorrow Cathedral in San Francisco, CA, on Sunday, June 28-29, 2014, during the celebrations in honor of the 20th anniversary of the glorification by the Russian Church Abroad of the Holy Hierarch John of Shanghai & San Francisco. The Consecration was led by the First Hierarch of the Russian Church Abroad, His Eminence Hilarion, Metropolitan of Eastern America & New York.

On May 17, 2022, following the repose of Metropolitan Hilarion, Bishop Nicholas was appointed acting ruling bishop of the Eastern American Diocese by decree of the Synod of Bishops.