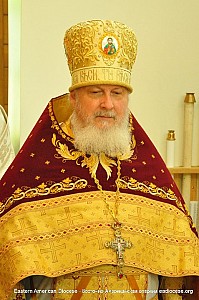 n Friday, February 6, Archimandrite Athanasy (Mastalski), longtime rector of Joy of All Who Sorrow Church in Philadelphia, PA, reposed in the Lord. He was 69 years old.

Fr. Athanasy was born on June 24, 1946 in Philadelphia. In 1975, he was ordained a deacon, and in the following year a priest, by Archbishop Nikon (Rklitsky). In December 1978, Metropolitan Philaret performed Fr. Athanasy’s monastic tonsure.

Hieromonk (and later Abbot) Athanasy led Joy of All Who Sorrow parish in Philadelphia for many years; he served in Holy Protection Church in New Brunswick, NJ and St. Nicholas Church in Red Bank, NJ, as well as at the convents in the Holy Land – Holy Ascension on the Mount of Olives and the Gethsemane Convent.

In December 2005, Metropolitan Laurus elevated Fr. Athanasy to the rank of archimandrite.

For many years, Archimandrite Athanasy was the guardian of the myrrh-streaming icon of the Holy Righteous Anna, Mother of the Most Holy Theotokos, with which he traveled to a multitude of churches and monasteries in the dioceses of the Russian Church Abroad. The holy image was painted in the Mount of Olives Convent by Nun Mastridia, and began to stream myrrh in the United States. It was well known that the future priest fell in his childhood and was very badly hurt; he prayed to St. Anna, promising that, when he had the opportunity and the funds, he would order an icon of St. Anna.

Archimandrite Athanasy spent the final years of his earthly life at St. Tikhon’s Monastery (OCA) in South Canaan, PA, where the services for the departed will be held.

The funeral will be served according to the monastic rite at 11:30 AM.

Through the intercessions of the Most Holy Theotokos and the prayers of the Holy Righteous Anna, may the Lord grant blessed repose to the soul of His newly departed servant, the Archimandrite Athanasy, in the mansions of the righteous, and make his memory to be eternal!