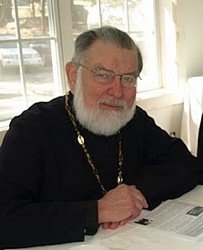 On Monday, June 13, Archpriest Theodore Shevzov (cleric of St. Nicholas Church in Stratford, CT) reposed in the Lord after several years of failing health. He turned 87 years old on June 8.

Born in Yugoslavia in 1929, Fr. Theodore was the son of Ivan I. Shevzov and Vera M. Pavlovskaya. After immigrating to America, the future Fr. Theodore received his education in polymer chemistry. He graduated from the University of North Carolina in 1953, and in the same year married Nina E. Dikovskaya. Theodore was a parishioner of the New Kursk Root Hermitage in Mahopac, NY; in 1971, he was tonsured a reader by Metropolitan Philaret (Voznesensky), and in 1972 was ordained a subdeacon. In 1974, Metropolitan Philaret ordained Fr. Theodore to the diaconate, while in 1985, Bishop Gregory (Grabbe) performed his priestly ordination, and Fr. Theodore was assigned as a cleric of St. John the Baptist Cathedral in Washington, DC.

In 1981, Fr. Theodore buried his son, Vasily. He is survived by his Matushka Nina and daughter Vera.

The editors of the diocesan website express their sincere condolences to Matushka Nina and the entire family. Memory eternal to the newly reposed Archpriest Theodore!

The funeral service schedule is as follows: