At 11:50 PM on Sunday, August 9, on the feast of the Holy Great-Martyr & Healer Panteleimon, patron of Holy Cross Monastery in Wayne, WV, Schemamonk John (Dezorzi) peacefully reposed in the Lord. The Canon for the Departure of the Soul was read when he reposed. The whole community then gathered at his bedside and the first panihida was served by monastery abbot Archimandrite Seraphim (Voepel) and the monastic clergy.

His body was then cleaned and dressed in his monastic clothing and the Great Schema while the Psalter was read continuously. His body was placed into a beautiful red cypress coffin that had been specially made by a friend of the monastery. The brethren then carried his coffin from the infirmary into the monastic church, where the Psalter readings continued throughout the night, in preparation for his funeral on Monday morning.

Fr. John was a member of the brotherhood of Holy Cross Monastery from 1998 until 2006, and returned to the Hermitage this July 28. Fr. John first became a monastic in 1973 and was tonsured into the Great Schema in 1976 at Holy Transfiguration Monastery in Brookline, MA, which at that time belonged to the Russian Church Abroad. After his time in Holy Cross, Fr. John was a member of several other monasteries, but upon being diagnosed with terminal pancreatic cancer, decided to spend his final days at Holy Cross, which he was allowed to do with the blessing of Metropolitan Hilarion.

On Monday morning, Fr. Seraphim led Fr. John’s funeral, co-served by monastery clergy. The burial took place at the new monastic cemetery, located next to the monastery’s outdoor Chapel of the Sign. 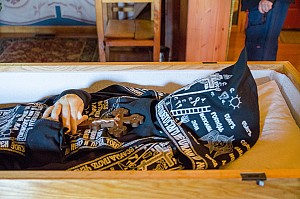