The Southern Lenten Retreat, being held for the second year in a row at Holy Cross Monastery, concluded its work on Wednesday, March 26 with a Liturgy of the Presanctified Gifts in Christ the Savior Church in Wayne, WV. The Liturgy was led by the First Hierarch of the Russian Church Abroad, His Eminence Hilarion, Metropolitan of Eastern America & New York, co-served by His Grace George, Bishop of Mayfield, abbot of Holy Cross. Concelebrating with the Hierarchs were 30 priests and deacons of the Eastern American Diocese. Also praying at the divine service were the matushkas taking part in the retreat, as well as the parish’s benefactors and parishioners.

At the Little Entrance, for his faithful service to the Holy Church and his missionary efforts, Metropolitan Hilarion awarded Archpriest John Moses (rector of Holy Myrrhbearers Church in Harrisonburg, VA) the right to wear the palitsa. Priest Demetrio Romeo (rector of St. Luke the Blessed Surgeon Mission and chaplain of the full-time Orthodox Paideia Classical Academy in Coconut Creek, FL) was awarded the nabedrennik.

Also taking part in the pastoral conference along with their husbands were the clergymen’s faithful partners ‒ the matushkas. Each of them had her own reason for participating in the retreat, and each takes a different approach to her role both in the home and in the parish.

Matushka Nancy (Anna) Crowley of St. Xenia Church in Methuen, MA, has more than 20 years’ experience in the home and parish. Her first priority is a warm and welcoming home, where she is a hospitable hostess and devoted helper to her Batushka – Archpriest Michael. This familial atmosphere easily spills over into life in their parish, where Matushka not only bakes prosphoras, but provides parishioners much-needed counsel.

Parishioners often turn for advice and comfort to Matushka Tatiana Weller of Holy Myrrhbearers Church in Harrisonburg. But Matushka, appropriately, does not take on additional and unnecessary concerns, not involving herself in complex or difficult situations, leaving the final decisions to her priest-husband.

"I always look forward to these conferences," said Matushka Tatiana. "I like interacting and sharing experiences with other matushkas. Father and I love visiting the monastery, and when we also have an opportunity to hear talks and sermons by distinguished spiritual teachers like Fr. Demetrios (Carellas), we make it a point to attend. Fr. Demetrios’ sermon touched our hearts; he instilled hope in us and gave us spiritual support, which will long warm our spirits upon our return to the world."

In his sermon in Christ the Savior Church, Fr. Demetrios – a Greek with a deep knowledge of Russian Orthodoxy ‒ used as one of his examples of selfless love and wholehearted devotion to Christ the 19-year-old Russian soldier Evgeny (Eugene) Rodionov, brutally martyred during the Chechen War for his refusal to convert to Islam. Such living instruction cannot fail to touch the heart!

Matushka Solomonia Wing of St. Nicholas Church (MP) in Edinboro, PA made a conscious decision to take several days off from life in the world during the Great Fast, in order to focus on the spiritual life:

"These gatherings and interaction help me better understand how to explain to my children why they should be a part of the Orthodox Church and active members of their parish, why they should attend services, and the importance and meaning we give to Great Lent. These same questions are often posed by our adult parishioners, too. You have to give them answers, but even more often, I’m sure, the example they are going to follow in the parish is the one set by the priest and matushka."

For the first time, matushkas participating in the retreat had their own separate program ‒ a master class led by Matushka Lubov Lukianov, during which she taught her sisters how to bake lenten ‒ and simultaneously delicious ‒ piroshki and pastries.

"This conference is organized intentionally with both clergy and matushkas in mind. During the Fast, we come together to pray and interact with one another. Many American matushkas come from the South, don’t speak Russian, and are unfamiliar with Russian customs. That is why I decided to share some of what I know with them," said Matushka Lubov. "In many parishes in old Russia, matushkas would bake and sell piroshki and bread. Even large cathedrals have been raised up, thanks to these labors by matushkas. I myself have long been using a good, light recipe for preparing piroshki with potato filling or pasties with mushrooms, and I offered these recipes to our matushkas. This was all new to them, and they took a great interest, happily rolling piroshki and making the fillings. I hope that, returning to their parishes, they will be able to spread these Russian traditions to their parishioners."

Metropolitan Hilarion thanked the matushkas for their active participation in the conference, after having seen the fruits of their interesting, useful, and delicious master class.

Upon completion of the Liturgy, many deserved words of thanks sounded out: first to Bishop George, for his incalculable hospitality and spiritual support for the retreat’s participants; to Fr. Jonah Campbell (rector of Christ the Savior Church) and the benefactors and parishioners, for the opportunity to celebrate the Liturgy together in their capacious and beautifully adorned church; to Archimandrite Demetrios, for spiritually fortifying and instructing the clergy and lay participants. Eastern American Diocesan secretary Archpriest Serge Lukianov thanked the hierarchs ‒ Metropolitan Hilarion and Bishop George ‒ for their participation and the time they had dedicated to everyone in need of edifying words, instruction, spiritual support, and the close human interaction with one’s Archpastors so badly needed by every priest. He invited all to take part in the celebrations dedicated to the 80th Anniversary of the Diocese, which will take place in Howell, NJ this November. Fr. Serge addressed many more warm words to his brother clergy, who found it necessary to carve 3-4 days out of their schedules in order to come and participate in the retreat, "especially when everyone spends a full day at work, in addition to responsibilities in the parish and at home."

In the second half of the day, having communed of Christ’s Holy Mysteries, obtained invaluable experience interacting with senior clergy, inspired and spiritually renewed by the prayerful atmosphere in one of the primary and fastest growing monasteries in the Russian Diaspora, and with a penitent heart following the Presanctified Liturgy, the clergy and matushkas returned to their parishes. 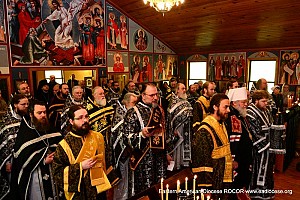