On Saturday, March 22, the feast day of the Forty Martyrs of Sebaste, Metropolitan Hilarion of Eastern America & New York, First Hierarch of the Russian Church Abroad (ROCOR), celebrated the Divine Liturgy in St. Nicholas Patriarchal Cathedral in New York City, co-served by Archbishop Justinian of Naro-Fominsk, Administrator of the Patriarchal Parishes in the USA. As reported on the official site of the Patriarchal Parishes, the Archpastors were co-served by Patriarchal and cathedral clergy, as well as Hieromonk Tikhon (Gayfudinov; cleric of the Synodal Cathedral of the Sign in New York City).

Special petitions were read at the Augmented Litany in accordance with the blessing of His Holiness Kyrill, Patriarch of Moscow & All Russia, after which Metropolitan Hilarion offered up a prayer for peace in the Ukrainian land.

Upon completion of the Liturgy, Metropolitan Hilarion greeted Archbishop Justinian, concelebrating clergy, and parishioners on the feast of the Martyrs of Sebaste. In turn, the Administrator of the Patriarchal Parishes thanked the First Hierarch of the Russian Church Abroad for the joy of shared prayer. In his address, Archbishop Justinian likewise noted that the entire Russian Orthodox Church continues to pray for peace in Ukraine, calling Her children to preserve faithfulness to the Holy Mother Church.

During their brotherly interaction at lunch, the Archpastors discussed various issues relating to life and activity in the Patriarchal Parishes in the USA and parishes of ROCOR. 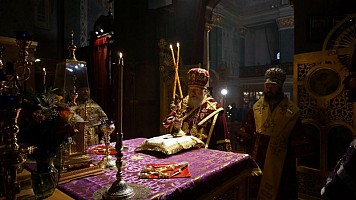