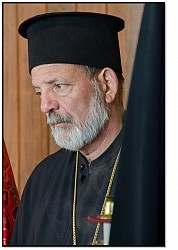 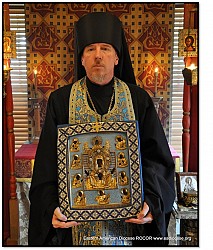 On Sunday, March 23, Abbot David (Pierce; rector of Holy Dormition (Holyrood) Skete in Jacksonville, FL), cleric of the Eastern American Diocese, reposed in the Lord. He was 54 years old. Fr. David was born in Alabama in 1959. In 1996, he was ordained a hierodeacon, and the following year a hieromonk. In 2008, he was accepted into the Russian Church Abroad, and after the repose of Abbot Augustine (Whitfield), assumed rectorship of Holyrood Western Rite Skete. For more than 25 years, Fr. David lovingly labored as a special education teacher in Florida’s public school system.

On the same night, Archpriest Alexander Atty (beloved and distinguished cleric of the Antiochian Archdiocese and former dean of St. Tikhon’s Orthodox Theological Seminary OCA in South Canaan, PA) reposed in the Lord. Fr. Alexander was a patron and close friend of the brethren of Holy Cross Monastery in West Virginia.