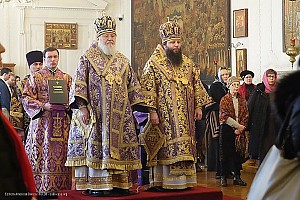 On March 5, the Sunday of the Triumph of Orthodoxy, Metropolitan Hilarion of Eastern America & New York celebrated the Divine Liturgy of St. Basil the Great and led the Rite of Orthodoxy in the Synodal Cathedral of the Sign in New York City. His Eminence was co-served by diocesan vicar Bishop Nicholas of Manhattan, Archpriests Vasiliy Raskovskiy (cathedral cleric) and Ioann Chervinsky (cleric of the Diocese of Kursk), Hieromonk Nikolai (Letsin), Protodeacons Vadim Gan, Dionysius Lvov (cathedral clerics), and Nathan Mousselli (cleric of St. Vladimir Memorial Church in Jackson, NJ), and Hierodeacon Panteleimon (Jigalin; cleric of Holy Dormition Convent "Novo-Diveevo" in Nanuet, NY). The Liturgy was celebrated under the aegis of the wonderworking Kursk Root Icon of the Mother of God.

A multitude of cathedral parishioners and faithful from other New York parishes came to pray at the divine service. Marking the end of the first week of Great Lent, many of them communed of Christ’s Holy Mysteries.

Upon completion of the service, Metropolitan Hilarion spoke about the origins of the tradition of the Triumph of Orthodoxy, about the Church’s teaching to venerate icons, which was restored at the Seventh Ecumenical Council, and about the persecution of the iconodules which nevertheless continued until 843, when under Patriarch Methodius of Constantinople the holy icons were finally returned to Hagia Sophia Cathedral. This great triumph was the beginning of the celebration of the triumph of truth over falsehood on the first Sunday of Great Lent – the Triumph of Orthodoxy.

"The twentieth century bore witness to an even greater persecution than had even been waged against the Holy Church," said Metropolitan Hilarion. "It appeared as if our homeland and our people were in a Babylonian captivity: the iconoclasts rose up against the churches, against the icons. But the Lord did not allow this even to triumph. And we must thank the Lord that today the churches are being restored and Orthodoxy is triumphant." Metropolitan Hilarion called on the faithful to make every effort to be worthy of the calling of an Orthodox Christian, to live worthily in accordance with the commandments left to us by Christ the Savior, and to preserve the purity of the Holy Orthodox Faith.

Then followed the Rite of Orthodoxy, at which the Symbol of Faith was outlined, the Holy Fathers who served Christ’s Church commemorated, and anathemas proclaimed against the purveyors of false teachings (heresies), which must be uprooted from the life of the Church. Cathedral Protodeacon Vadim Gan intoned the proclamations of the Rite of Orthodoxy.

The sisterhood of the Synodal Cathedral organized a luncheon for the clergy and faithful, during which those present continued their fellowship. 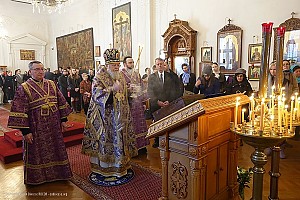