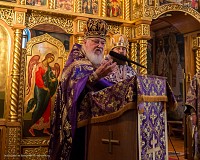 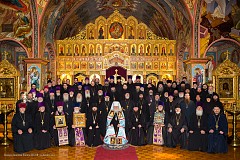 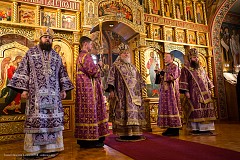 On Wednesday, March 22 – the feast of the Forty Martyrs of Sebaste – the Lenten Retreat for clergy of the Eastern American Diocese concluded with the Liturgy of the Presanctified Gifts. The retreat took place on the fourth week of Great Lent, following the Sunday of the Cross; although the rubrics called for the feast to be moved this year so that it did not fall on the Wednesday of the Cross, the hierarchs blessed to celebrate the feast on its fixed date, so as not to disrupt the Retreat schedule. The divine services, as well as the Retreat’s lectures and discussions, took place under the aegis of two wonderworking icons of the Mother of God, a special blessing for all of the participants: the Kursk Root Icon, and the myrrh-streaming Icon "Softener of Evil Hearts."

In the morning, the clergy gathered at St. Alexander Nevsky Diocesan Cathedral to greeting the First Hierarch of the Russian Church Abroad, Metropolitan Hilarion of Eastern America & New York. At Liturgy, His Eminence was co-served by Metropolitan Jonah (Paffhausen; former Primate of the Orthodox Church in America), Bishop Nicholas of Manhattan (vicar of the Eastern American Diocese), Bishop Irenei of Sacramento (vicar of the Western American Diocese), and over 70 concelebrating clergy.

-          Priest Matthew Williams was elevated to the rank of archpriest;

On the eve of and during the service, the faithful confessed their sins, and upon completion of the Liturgy, Retreat participants, parishioners, and guests communed of Christ’s Holy Mysteries.

Upon completion of the Liturgy, Metropolitan Hilarion addressed the gathered hierarchs, clergy, and faithful, saying, in part: "We give thanks to God for the great blessings He has imparted to us today at the divine services, which were able to concelebrate, partaking together of the His Holy Mysteries, and for our fellowship yesterday, shared over the course of the Pastoral Retreat. We would especially like to thank His Grace Irenei for his talk on the Great Canon of St. Andrew, and Fr. Peter Heers, who spoke on the Council of Crete and the implications for Orthodoxy of the resolutions adopted there."

Metropolitan Hilarion then presented Bishop Irenei a set of white hierarchal vestments, and Fr. Peter with a copy of the myrrh-streaming Icon of the Mother of God "Softener of Evil Hearts" with a commemorative plaque. He thanked all those who attended, as well as the organizers and volunteers who made the Retreat possible.

Protopresbyter Valery Lukianov, dean of New Jersey and the cathedral’s pastor emeritus, shared some words of wisdom with those present, saying: "Before our eyes today, we see a reversal of the order of things. All our priests’ lives involve hearing confessions, when the people come to lay themselves bare with their iniquities. Today, the situation is the opposite: we come here today naked, beyond vestments or special privileges, just plain sinners, crawling to the church under the epitrachelia of our brothers in Christ. We come to tell our Lord Jesus Christ, to tell the priest, and to tell ourselves how unprepared, how wicked sometimes, how ungrateful we are. And in our nakedness, we beg God to come and to help us to realize how important it is to achieve humility in our life. This is a beautiful day, the feast of the Forty Martyrs… we know the story, we have heard it many times, but one element reaches out to eternity: having been tortured to death in the freezing water, thirty-nine martyrs were dragged out dead and placed in carts to be disposed of. One remained barely alive; his mother was present, and ran to him, saying, ‘Son, you must go with them! You must be one of the forty.’ Imagine this! a mother begging her son to die, to be a martyr. He is almost unconscious, badly wounded, and does not know what to do. She, this woman, receiving strength from Heaven, lifts his body and throws it onto the cart. She follows the cart, begging God to grant him the martyr’s crown.

"This incident is the most important lesson we should take away from the feast day: we are all part of the Church. And though pastoral life may be difficult, we must remember that, in our priestly martyrdom, we always have the Mother Church! This wonderful Mother, who picks up her son and takes him the rest of the way to his martyrdom. This is our Church! The Church is always with us in the most difficult times of our lives, as the mother was for this martyr. Let us never forget that we have this loving Mother Church, who can take us and put us on the cart, who can encourage us to endure to the end in our martyrdom, who can ensure that we are taken the rest of the way with the chosen saints, martyrs for Christ. How many times do we forget this, or become despondent, or indolent? And yet our Mother Church is there to raise us up from this iniquity, and puts us back on the path of service to God and the people He has given us, these beautiful souls we must cover and bless with God’s grace, giving them joy and new life. Let us always remember this lesson."

The protodeacon intoned many years to the hierarchs, Retreat participants, and namesday celebrants, and Metropolitan Hilarion then blessed all those present with the cross.

Concluding the pastoral Retreat, a group photograph was taken of all of the participants. They then proceeded to the church hall for a farewell luncheon, during which Fr. Valery was congratulated on the occasion his namesday, and it was announced that, God willing, the next pastoral conference will be held at the end of October at Holy Trinity Monastery in Jordanville, NY. 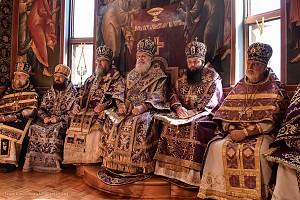