New York: Archdeacon Eugene Burbelo has Reposed in the Lord 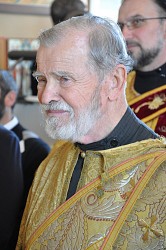 On Wednesday, April 5, after a protracted, serious illness, Archdeacon Eugene Burbelo (long-time cleric of the Synodal Cathedral of the Sign in New York City) reposed in the Lord. He was ordained by Metropolitan Anastassy (Gribanovsky) in 1955.

The body of the long-time clergyman of the Russian Church Abroad will be brought to the Synodal Cathedral by the beginning of Liturgy on Lazarus Saturday at 9:30 AM. Fr. Eugene’s funeral will be performed there on Great Monday after the Liturgy of the Presanctified Gifts.

Schedule of Services for the Departed:

Saturday, April 8: The Raising of Righteous Lazarus
The body of Archdeacon Eugene will be greeted with a Litiya at 8:45 AM.
Hierarchal Divine Liturgy at 9:30, followed by a Panihida.
All-Night Vigil with the Blessing of Breads at 6:00 PM.

Sunday, April 9: The Entry of the Lord into Jerusalem
Hierarchal Divine Liturgy at 9:30 AM, followed by a Panihida.
Bridegroom Matins at 6:00 PM.

Monday, April 10: Great & Holy Monday
Liturgy of the Presanctified Gifts at 9:30 AM. ‒ Black vestments.
Funeral at 11:30 AM. ‒ Purple vestments.
The burial will take place at Novo-Diveevo Convent in Nanuet, NY.

Russian Orthodox Church Outside of Russia 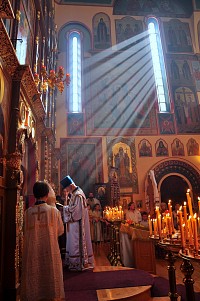 Photos from the diocesan archives