Buchendorf: Epistle of the Council of Bishops of the Russian Orthodox Church Outside of Russia 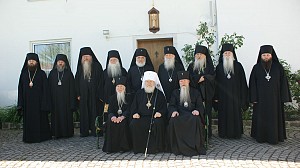 We remember those who labored toward the reestablishment of unity, and those who continue to work toward the strengthening of our spiritual bonds. On the feast of the Ascension of the Lord, we prayed together with the Patriarch of the Russian Orthodox Church and the President of the Russian Federation at the divine services during the consecration of the Church of the Resurrection of Christ and the Holy New Martyrs & Confessors of Russia at Lyubanka, and we conclude our assembly with the great consecration of the Cathedral of the Holy New Martyrs & Confessors of Russia in the city of Munich, the only church of the Russian Church Abroad where His Holiness Patriarch Alexey II of Moscow & All Russia once served, who had together with Metropolitan Laurus of blessed memory signed the Act of Canonical Communion. We always knew that the external unity that was once rent asunder was always preserved in the spiritual plane.

With gratitude with God, we also mark the hundredth anniversary of the birth of a New-Martyr of Russia who manifested the phrase "the blood of Christian martyrs is the seed of faith." St. Alexander (Schmorell) of Munich spilt his blood in Germany. The hundredth anniversary of his birth is marked by the completion of the construction of a church not far from his grave. The cathedral was consecrated by His Beatitude Onufry, Metropolitan of Kiev & All Ukraine, along with the Primate of the Russian Church Abroad, Metropolitan Hilarion, along with all of his fellow bishops, bishops from Russia and Ukraine and of other Local Orthodox Churches. In the global struggle of the Russian New Martyrs, among them St. Alexander, the East unites with the West.

The restoration of the Patriarchate at the All-Russian Council of the Russian Church, the hundredth anniversary of which we now celebrate, was a positive step toward a return to our Christian roots, to the 1,000th year of existence of our Church body. A leading role in the reestablishment of the Patriarchate was played by a hierarch who himself became the first Primate of the Russian Orthodox Church Outside of Russia, the Most Blessed Metropolitan Anthony (Khrapovitsky) of Kiev & Galicia of blessed memory. Based on the work of the Local Council of 1917-1918, he and his brother-archpastors preserved the catholicity of ecclesiastical governance in distant lands and, in this way, fealty to the legacy of the Mother Russian Church. The theology of Metropolitan Anthony returned the cognizance of the Church to her patristic roots; it cleansed Russian theology from imposed alien influences and in many ways determined the theology of the Church Abroad, and manifested itself in the legacy and practice of pastoral ministry.

The triumph of the catholicity of the Russian Church and her New Martyrs lies in the fact that despite the crumbling of the Orthodox empire and the imposition of a regime whose ideological goal was to fight God and everyone who believes and worships Him, faith in the truth and the Church could not be destroyed. In light of the apostasy that began in earnest in the 19th century, the struggle of bearing witness to the Faith "even unto death" is especially significant, just as the image of the purity of family life of the last Russian Emperor was. We are all called upon to make sense of the spiritual life of the peoples of Russia and of the whole world.

The spiritual catastrophe of the Russian nation led to the destruction of a mighty state and to terrible sufferings. How could it happen that a significant portion of the people, who for almost 1,000 years had borne the name of Christ, turned against the Church? St. John of Kronstadt often prophesied about the consequences of turning away from the Church. "Ye shall be as gods…" (Genesis 3:5) became the slogan of a new order, and people strove to establish a world without God. "Faith in the word of Truth, the Word of God, has disappeared, and was replaced by faith in human reason," wrote St. John. "Children no longer obey their parents, students their teachers… Marriage is mocked, family life is decaying."

Today entire peoples both in the Fatherland and abroad face a choice: spiritual cultivation of the soul or utter devotion to material well-being. God forbid that we once again see the brutal consequences of the deceptive spiritual and moral choice of willingly sacrificing our souls to evil substitutions. That is why once again raise the call to conscientious purification, not in the political sense, but for the sake of obtaining spiritual succession, gazing upon the path of the New Martyrs, and to bid farewell to the symbols of militant atheism, rid ourselves of the old glorification of murderers by naming cities and towns after them, streets and plazas, train stations and parks; we call for the removal of the body from the central square of the nation of the one whose name is connected with the establishment of the militant atheist state, which led to the sacrifice of millions of lives to its ideology.

Returning to our Christian roots is our moral choice. It is built on the search for God, church life, learning about faith, growth and strengthening of our moral struggle. It is from our parents that we must receive our first experience of knowledge of God, of prayer, participation in the Mysteries – we call upon all parents to tend to their own spiritual edification, and not only in word, but to teach their children by example. It is the family itself, the "little Church," that the full understanding of church life is created.

The expulsion of multitudes of people from Russia introduced the Wes to Orthodox Christianity. Divine Providence, even the loss of goodness had positive results. Today, Orthodox Christians living in the West, where the family unit is in crisis, are called upon to serve as an example of moral purity in their own lives in their communities, both in Christian family life and in the monastic service.

Bearing all of this in mind, let us courageously declare in the shining joy of the Church, together with Holy Apostle Paul and St. John of Kronstadt, the Martyred Royal Family and the multitude of New Martyrs and Confessors of Russia: "I can do all things through Christ which strengtheneth me" (Philippians 4:13).

With love in Christ,

Signed by all the participants of the Council of Bishops.