Archimandrite Maximos (Weimar): "It Looks Like a Good Time for Moving & Establishing a New Monastery"

Until 2010, the monastery was under the omophorion of the Jerusalem Patriarchate, and is now under the canonical authority of Metropolitan Hilarion, First Hierarch of the Russian Church Abroad. Recently, the Brotherhood faced a difficult decision; by choosing to remain within the Russian Orthodox Church Outside of Russia, a change of residence is now necessary.

The present Brotherhood consists of ten monks and is led by Fr. Maximos. In addition, there is a thriving Orthodox Christian lay community, including many Russians, Ukrainians, Greeks, Romanians, and American converts, which has grown up around the monastery, and services are well-attended. Services are mainly in English, with exclamations in Church Slavonic, Greek, and Romanian.

With the changes awaiting the monastery, Fr. Maximos spoke to the Diocesan Media Office about the current situation at the monastery, and answered our questions. 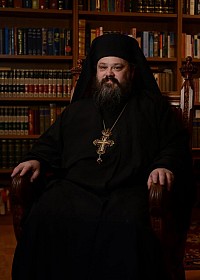 –Father, would you kindly tell us about the monastery where you have spent more than ten years of your life?

– The monastery in Long Island began in the 1970s in the Bulgarian Church. It was originally St. John of Rila Monastery. The church was built in the late 1800s as a Catholic church in the village. Then, sometime in the middle of 1970s, it was acquired by an Orthodox priest and turned into monastery.

In the 1990s the priest, Fr. Paul Ischi, sold the monastery to the Jerusalem Patriarchate. For about ten years they held no services, and it was kept shut. In the 2000s, Jerusalem sent a bishop here, Archbishop Damascinos, who renamed it Holy Cross Monastery, and in 2003 he appointed me to be its abbot.

We started with just one other monk and me, and over the period of several years we built the place up to about ten monks.

The brotherhood we have now is a mix of people who started in this monastery, who have come from the Glorious Ascension Monastery in Resaca, GA, from Mercy House in New York City, and other monasteries.

A good percentage of my monks are clergy – hieromonks and hierodeacons. They have a lot of pastoral duties. Hieromonk Silouan (Justiniano) is also a very good iconographer. He is a priest, and he divides his time between doing most of the daily services, serving our community, the lay people, and painting icons.

One of our brothers, Hieromonk Zosimas (Krampis), serves for the English community in St. Sergius Chapel at the Synodal Headquarters in New York City, and in the monastery he serves, sings, and cooks.

We produce handmade beeswax candles to sell around the area. Two of the monks are dealing primarily with that: shipping, etc. We have one of the monks deal with book publishing – Fr. Sergio (Justiniano), Fr. Silouan’s brother.

We serve Liturgy on Saturday and Sunday, and we have about three Liturgies per week, in addition to other services.

In 2010, the Brotherhood returned to the jurisdiction of ROCOR, but the status of the monastery buildings was not clear. We just continued to operate under the omophorion of the Russian Church Abroad. About two years ago, the Jerusalem Church informed us that, if we wanted to stay on the property, we would have to return under the Jerusalem Patriarchate. But the brethren wanted to stay with ROCOR. We told them that, and now they want the property for their own purposes.

We have been looking for a new home for the monastery, relatively close for the place where we are now, for about a year. We wanted to stay in Long Island to serve our people, because we have a good community there.

– How large is that lay community?

– On an average Sunday, it is about 50-60 people. On Pascha, we have around 300 worshippers. It is a mix of Americans, Russians, and Greeks in equal proportion, with some Romanians. They come to church, they worship, they support us. When we are fully in ROCOR, there will be more services in Church Slavonic.

– And what else do you have in mind for your newly established monastery?

– I want to work closer with the Diocese and with the deanery. I’ve spoken with Metropolitan Hilarion and our dean – Archpriest Alexandre Antchoutine – about bringing in the Russians who live in the area. Fr. Alexandre said that we might want to start with a Slavonic Liturgy on Saturdays.

The political situation made it difficult to do anything like that before, but now we can do a lot. One of our deacons can serve in Slavonic, while most of us can do only English, but we plan on learning to serve in Slavonic. We also have lots of opportunities to travel around and do presentations on the monastic and spiritual life. We also do some work on the Internet: we have a website and a Facebook group. Fr. Sergius is our graphic designer, and Fr. Silouan does the illustrations. They did the logo for the new St. Dionysios the Areopagite Monastery.

– Why did you decide to change the name of the monastery?

– Because we do not know what the Jerusalem Patriarchate is going to do with that location. If they continue to have it as a monastery and a church a few miles away, we can’t have two monasteries in a little village with the same name. Even now there is confusion when I say ‘Holy Cross.’ People think of the monastery in West Virginia, and also the Greek seminary in Brookline, MA. ‘Holy Cross’ is great, but there are a lot of good names. As far as I can tell, it will be the only St. Dionysius Monastery in America, and certainly in ROCOR, without being confusing.

– What was your own path to the monastery?

– I was born in Long Island, and my given name was Louis Weimar. My family is a mix of German, Irish, and Hungarian. We moved to South Carolina when I was young. I went to school and attended college there. Prior to becoming Orthodox, I was a movie theater manager. In mid-1990s, I converted to Orthodoxy in South Carolina, and in 1995, I came to the monastery in Resaca. In 1997, I was tonsured a monk with the name Maximos. In 1998, I was made a deacon, in 2000 – a priest. In 2003, Archimandrite Damian (Heart), who was the abbot of the monastery prior to me, brought the monastery from ROCOR into the Jerusalem Patriarchate. I was made an archimandrite by Patriarch Irenaios, and the secretary to Archbishop Damascinos, who was in charge of the Jerusalem Patriarchate parishes in the USA.

In those days, the Jerusalem Patriarchate had about 25 parishes all throughout the United States. Then Jerusalem decided to withdraw its jurisdiction, and in 2010 we were received back into ROCOR by Metropolitan Hilarion.

Most of my education has been in the monastery. This year, I will have been a monk for 20 years. Fr. Damian was good and encouraging, and I do the same thing with my monks, encouraging a lot of reading and study in addition to prayer. Of course, we have the prayer rule and we have liturgical services. But also we spend a good amount of time reading the Holy Fathers, talking and discussing theology. All of this is important today. We don’t live in the wilderness; we have to go out of the monastery quite frequently, so we get very many questions about Orthodoxy, and you certainly have to be prepared to answer them. So, I encourage my monks to be able to do that, to be able to converse in an intelligent way about the Orthodox Faith.

This is our particular mission. Almost all of us are converts to Orthodoxy. In my opinion, America is a huge mission field for people to convert to Orthodoxy. And I know that the leadership of the ROCOR – Metropolitan Hilarion and the Synod of Bishops – has been very strong and encouraging us toreach out people in English, in addition to keeping the customs of the Russian Orthodox Church and Slavonic services.

It is a great blessing for us to be able to serve in English, and bring people into the Faith. But we also keep in accordance with traditions: we use Elizabethan English, we serve on the Julian ("Old") Calendar, and the mix of all these things is very important.

– Very soon, the brethren have to vacate the monastery. What is the situation right now?

– Right now, we are looking at particular properties, and are engaged in negotiation for a new location, which we hope to announce soon. Our goal is to stay within ten miles of the current monastery. The new location has to be close enough, so that the move will not be that difficult. Also, we are currently in the process of raising money.

The Jerusalem Patriarchate has a representative in the property now, and he has been very cooperative. So we will be able to take all of the things we have brought here over the years.

When I tell people that we have to move, everyone looks so sad and concerned, but the monks are very enthusiastic about it. It is really a tremendous opportunity for us to start over. We will have our own place, and will be able to build the church we want.

I have lived in this monastery for 13 years, which is the longest single place I have lived in my life. But the monks are monks, so we go where we need to go, as the Gospel says about leaving property and not being concerned about material things. There is no room for sentimentality. There will be a lot of work, but it’s a good kind of work.

I knew the situation had been brewing for several years, and I said to the monks that this year, the situation was going to be resolved. I have to say that Metropolitan Hilarion has been incredibly helpful to us, and very supportive, and very patient, and very encouraging in the whole process. We thank God that he is our bishop. He had to deal with pressure, but he always kept us in mind, which we very much appreciate.

– How much will it cost you to start the new monastery?

– To get started, we have to raise $500,000, which sounds like a lot of money. And it is a lot of money indeed; we have to move quickly. The main thing on the agenda is to raise money to get the property which we have in mind, and which is about five miles away from our current location. There is a house there which is a couple hundredyears old. We will be able to build a church, to do some interior changes in order to have cells for the monks. The chapel can be set immediately, and my goal is to build the church for Pascha. Once we get the property, we will be able to make it functional for our purposes very quickly.

It looks like a good time for moving and establishing the new monastery. If we get a bigger place like this, we will be able to get it to grow. This is precisely what we want to do. We are young enough, we have enough energy, enough health to get this done. If we waited another ten years, we would not able to do that. Everything looks good for us. This is a perfect time to have everything done.

The Brotherhood requests your help. If you are able, please visit their GoFundMe page here and donate to help this worthy endeavor.