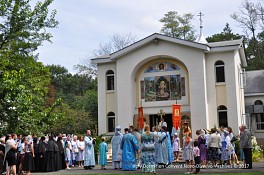 On Sunday the 27th and Monday the 28th of August, the clergy and faithful of Holy Dormition Convent "Novo-Diveevo" in Nanuet, NY celebrated the great feast of the Dormition of the Most Holy Theotokos. On Sunday evening, convent clergy served the All-Night Vigil with a Litia, followed with the blessing of five breads, wheat, wine, and oil. Vigil was led by the dean of the convent’s St. Seraphim Cathedral, Archpriest Alexander Fedorowski, co-served by Archpriest Yaroslav Belikow and Protodeacon Serge Arlievsky.

The following morning, His Eminence Hilarion, Metropolitan of Eastern America & New York, First Hierarch of the Russian Church Abroad, arrived at Novo-Diveevo to spend the feast day with the clergy, monastics, and faithful of the convent and celebrate the convent’s patronal feast day. The service began at 8:30 AM with an akathist to the Dormition and lesser blessing of water, followed by the Greeting of the Metropolitan.

Concelebrating with His Eminence was the above-mentioned clergy, joined by Abbot Photius (Oulanov; confessor of the monastic community) and Hierodeacon Panteleimon (Jigalin). The divine services were accompanied by the pious singing of the cathedral choir under the direction of Matushka Maria Fedorowski and Reader Nicholas Ilyn. A multitude of faithful confessed the previous evening, and more did so prior to the start of the Divine Liturgy, partaking of Holy Communion.

In his sermon, the Metropolitan spoke about the importance the Mother of God in our lives, as well as the significance of the feast of her Dormition. Following the sermon, a procession was held around the cathedral.

At the conclusion of the service, the Polychronion was intoned to Abbess Makaria and the sisters of the convent. Metropolitan Hilarion congratulated the abbess, sisters, clergy, and faithful with their patronal feast. Father Alexander thanked His Eminence for their joint prayer, and invited all to a festal luncheon in the main dining room of the convent’s adult home. 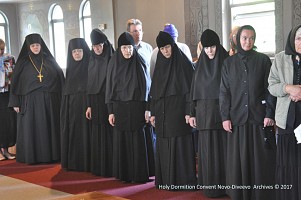