"One Must Not Become Accustomed to a Miracle"

The last interview with the murdered Jose Muñoz-Cortes under the title "One Must Not Become Accustomed to a Miracle" was published in the 27th issue of "The Russian Pastor," a journal published three times a year in San Francisco, CA. At the beginning of the conversation with the editor of the journal, Fr. Peter Perekrestov, in responding to a question as to whether any "habituation" to the miracle that has continued in the course of fifteen years had occurred with him, Jose, the guardian of the Icon answered thus: 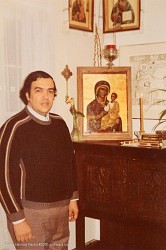 "We ought never to become accustomed to miracles. If this happens, the miracle will cease to be a miracle. The man who understands what holiness and a holy object are can never become accustomed to a miracle. His attitude towards the mystery will be not as towards a magician's box of tricks, but as towards something incomprehensible, which evokes fear and love towards the Creator."

Further, this question was put to Jose: "Quite a few people consider that the Icon is your personal property and that you may do with it as you please. How do you reply to such people?"

"This is not so. I am only the guardian of the Icon. If the Icon belonged only to me, I would sit quietly at home and not overtire myself with endless travels from parish to parish around the globe and would not have to go to meet God's people…

"I have never refused to visit parishes if this depended on me. I think that I have visited almost all of the parishes of our Church Abroad. ...the Icon is wonderworking, and we may not control or manage it. For example, once I set out from Montreal with the Wonderworking Icon for New York, where a parish was awaiting me, but the airplane circled over New York several times and returned to Montreal. What does this mean? For me the answer is clear: I ought not to have gone there. Another time I took a taxi, and suddenly a car appeared in front of us: we had to stop abruptly. The glass on the Icon's case cracked. Nothing happened to us, but I had to return home in order to clean the Icon of the broken glass, while at that time the airplane took off without me. I could not set out to where they awaited me… In July of '95, when I was in the skete on Athos where the Icon had been painted, the abbot of the skete bade me to make a bow to the ground before each trip with the prayer: ‘Matushka, bless.’ ‘After this,’ said the abbot, ‘go with God.’ I believe that from that time, as I began so to do, sometimes I especially feel in my soul a need to go to one place or another.

"…in our time, as in the times of Christ, holy objects ought to go to the people, just as holiness went to them. This is not a tradition which I myself have instituted. The Lord knows how difficult it is for me to travel; this affects my health, but with joy I fulfil this obedience before the Mother of God and God's people, who with great joy await the Queen of Heaven."

"The Athonite abbot who gave the Icon over to me said to me: ‘A church in which there is no love, compassion and mercy is not a church.’ This teaching was profoundly impressed on my heart…"

To the question, "Which miracle was particularly impressed on your memory?" Jose replied that there are miracles small and great:

"I remember many years ago I was flying from Montreal to Saint Louis, MO. A woman seated next to me asked what the fragrance was. When I replied to her that a wonderworking icon of the Mother of God was with me, she began to weep and related that she was flying to New York for a serious operation. With tears in her eyes, she said that the Mother of God had found her and wanted to help her. This made a big impression on me. Later I received a letter from that woman in which she informed me that the operation had gone successfully.

"Only people with a pure heart are capable of beholding small miracles. I remember once in Argentina, when we arrived in the province of Miciones (the subtropics, clayey impassable roads) during the rainy season; it was very difficult to drive and to walk. In the church of the Protection of the Most Holy Theotokos in the small town of Trescapones, which we finally reached, the matushka there noticed that the church was surrounded by a garden of beautiful flowers which had appeared for the arrival of the Icon - the day before our arrival nothing had been there. When the Icon arrived, not only the flowers appeared, but the church was illumined by sun beams. And only the matushka paid attention to this miracle. Spiritual life is revealed to man by such miracles.

"It is difficult to forget the physical healings of people, but the spiritual transformation of people before the Wonderworking Icon always stands out in my memory. Many approach the Icon and begin to weep. The Icon so touches the souls of people that they feel a need to receive communion. This for me is the greatest miracle…

"There are people who in approaching the Icon are seeking magic, but instead of this feel the miracle. Even not very spiritual people relate to the Icon with reverence, and holiness is always felt during the divine services at which the Icon is present… In the presence of the Mother of God, it is somehow easier for people to be raised on high. The Mother of God always followed her Son. She stood near Him, and, therefore, when the Wonderworking Icon is in church, it is easier for us to be lifted up to her Son."

In another part of the interview published in the journal "The Russian Pastor," Jose, literally expressing a presentiment of his coming death, declared:

"…Believers ought to be ready to die for the truth, and not to forget that in acquiring enemies here, we acquire the Heavenly Kingdom… He who is faithful in little things will be faithful in great things, when it is required. Given an opportunity to become confessors, we ought not to lose it. Having lost the earthly life, we find the heavenly. We ought not to fear death for Christ."