On the Death of José Muñoz-Cortes

At the end of October 1997, a terrible event took place that shook the whole Orthodox world – Jose Muñoz-Cortes, the guardian of the renowned wonder-working, myrrh-streaming Icon of the Portaitissa, was brutally murdered in Greece by a 20-year-old Romanian man. On the 12th of November, he was buried in the cemetery of Holy Trinity Monastery in Jordanville, NY. The "Icon's House" society in Montreal published the following obituary: 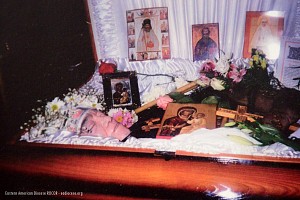 "Satan, loosed from his bonds, has deceived all nations," said St. Andrew of Cæsarea in the fifth century AD. In the final days of the twentieth century, these words of the hierarch are no longer a menacing foreboding of that which is only just coming into the world, for which one ought – somehow or other – to prepare, but a concise and exact description of our general situation today. People are no longer merely burdened by Christ’s preaching and, in attempts to soothe their aching conscience, declare the Lord non-existent. The epoch of unspiritual rationalism, "atheism" and progressivist theories is receding into the past. "Antichrist," says Venerable Nilus the Myrrh-Streaming of Athos, "will give a vitiated wisdom to unfortunate man…" We live precisely in the times of a flowering of spirituality – but only of satanic spirituality, when all that is of Christ, of Jesus, of God evokes the tormenting irritation of the carnal man – and the rabid malice of the deluded.

By one of these deluded men, Jose Muñoz-Cortes – the guardian of the wonderworking, myrrh-streaming PORTAITISSA Icon of the Mother of God – was brutally murdered.

Fifteen years ago, in the fall of 1982, by ways unknown to the mind, an Orthodox Spaniard, an instructor in art history at the University of Montreal, was called by the Lord to a special ministry, which he managed to seal with a martyr's death.

The sinister circumstances of Brother Jose’s death are still far from clear, but confronted by this death you involuntarily ask yourself questions that are remote from those which constitute the subject of a police investigation.

What did he feel when he first visited the Nativity Skete on the Holy Mountain of Athos, where the image of the Iveron Mother of God, noticed by him seemingly by chance, shook him?

How did he understand the words then of Father Clement, the superior of the Skete, who, having unexpectedly yielded to the requests of the visiting young iconographer, said: "The Most Holy Virgin will leave with you"?

In what way was the gradual realization of the miracle expressed for him - from that very day, the 24th of November 1982, when José, having awakened in his Montreal apartment at about three o'clock in the morning, sensed a wafting fragrance whence he knew not?

The Lord led him with a mighty hand and a lofty arm, but at the same time everything in the life of the future guardian of the Wonderworking Image developed artlessly and, if it is allowed so to express it, naturally.

The scion of an ancient race, José was born in 1950 in a pious Catholic family in Chile. In 1962, the 12-year-old, then living in Santiago, was struck by the Orthodox divine service in the local church of the Holy Trinity and the Kazan Icon of the Mother of God. He found himself in the church, as it were by chance, on the way to the Catholic cathedral.

In two years, Archbishop Leonty of Chile baptized him into Orthodoxy, to which the consent of José’s mother was received. He studied theology in college for three years. He wanted to accept monasticism, but an Orthodox men's monastery was not to be found in Canada, to where he had moved.

At the same time, he constantly turned in prayer to the Most Pure Theotokos, so that she would point out to him the way "wherein I should go." It was determined for him to be at a Miracle in a world that is incapable of containing such a miracle, for the holy Myrrh-streaming Image of the Hope of the hopeless has healed not only the bodies of those who have turned to it, but also the souls, pacifying evil hearts, bestowing the gift of tears and helping to find hope.

Whoever has happened to see the faces of the people - Orthodox and heterodox - in the numerous parish churches and monasteries where Brother Jose, the guardian, brought the grace-filled Myrrh-streaming Image entrusted to him of the Portaitissa, who opens the doors of paradise to the faithful, could not but sense, to the extent allowed him, how terrible and unliftable was the obedience given this man, and how unbearable this must have been to the ancient serpent, the enemy of Christ’s Church. The more blinding the uncreated light of Christ's miracles is, the darker it is in the kingdom of this age – and the murder of Jose Muñoz-Cortes, the guardian of the Wonderworking Image of the Mother of God, is, we trust, one more sign of the exhaustion of decrepit times that have outlived themselves, a sign of the rapid approach of the Invincible Victory. "Even so, come, Lord Jesus!" (Revelation 22:20).