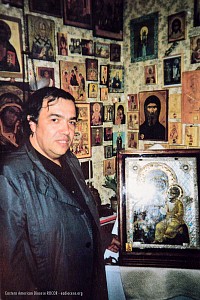 In 2005, I spent the first week of Great Lent at Holy Trinity Monastery in Jordanville. There Monk Vsevolod gave me a present of a copy of an iconographic image of Brother Jose Muñoz-Cortes, curator of the Miraculous Iveron-Montreal Icon of the Mother of God. It was one of the images of Martyr Joseph written at Optina Hermitage. Although I was surprised to see an icon written before he had been glorified as a saint, I was grateful to receive the gift.

To my shame, for several weeks I paid no attention to the icon and did not even put it on the shelf with my other icons. Some time later, a certain Nun I... of my acquaintance told me that she often prays to Brother Jose. I remembered my icon, and immediately put it in a prominent place: before my Iveron-Montreal Icon, written in Moscow in 1998. I began to pray to Brother Jose daily, and although, unfortunately, I had not commemorated him while he was still alive (whenever he came to visit our church with the Icon, he stood quietly in the back), he quickly became "my" saint.

I again went to the Monastery for Passion Week. On one of those days – I believe on Great Tuesday – there was a break between the lengthy services in the morning, and I went to the cemetery to rest a bit. As always, I venerated the Brother Jose’s memorial Cross and lay down on the bench. In the warmth of the sun, with birds singing, I quickly fell asleep. When I returned to church, Nun I…, who had told me to pray to Brother Jose, asked where I had been. When I told her, she asked in amazement, "How could you have possibly slept in such cold and wind, and on such a little bench?" With no less amazement, I remembered how well I had rested – as if I spent the night sleeping on the most comfortable bed!

On Great Friday, I went home so as to spend Pascha with the family. On Sunday, we had a house full of guests. Somewhere around 1:00 AM, a certain woman named K... and I began to clean up the kitchen. We were talking, and suddenly I decided to show her my room. There the conversation turned to Brother Jose, and I told her about my sleeping before his grave, and then I showed her the Icon. "Why is it so shiny?" K… asked. I carefully took the Icon down from the shelf, and inspected it. To my great amazement, next to the Martyr’s right eye there was a tear-shaped drop of oil. Little drops appeared on his right cheek, on his forehead, and on his neck. Although the drops were oily, they did not roll down, and several minutes after I had wiped off one of them with my finger, another drop took its place.

Words could not express what I felt at that moment. I was frozen in place – neither my spirit nor my body knew how to react to, how to believe what had happened. K… Left about an hour later, and I, in total shock, continued to look for a very long time at the kind but stern face of the Martyr. I did not know what to do: It was too late an hour to call the Monastery or our Batushka, and I didn’t want to be calling just anybody. I read the Akathist to the Mother of God, a Canon to Jesus Christ, and the Troparion printed on the reverse of another Icon of brother Jose – one in which he is with Vladyka St. John of Shanghai. Afterwards, I went to bed, although of course I could not sleep. All night I would get up to look at the Icon, to make the sign of the Cross, and to pray once again. I had the sense that something of such importance had happened, that my life had changed, literally in a moment. Everything goes by so fast, so imperceptibly, that often there is no time to think about what is going on around you. Of course, we are living in spiritually difficult times, but God is always sending us miracles, sometimes obvious, and sometimes not so obvious, to strengthen our faith. In that Paschal night I actually felt that despite the constant spiritual battle, we are never left to fight alone.

By morning, there was already less oil. Unfortunately, I did not think to gather up the drops in a piece of cotton and to take the Icon with me to church. When I returned after the service, there were only a few drops, which I wiped off as my priest had suggested. By evening, the Icon was already dry. For several months, the Martyr’s face remained covered with a very thin layer of oil.