Accounts regarding the new copy of the Montreal Iveron Icon 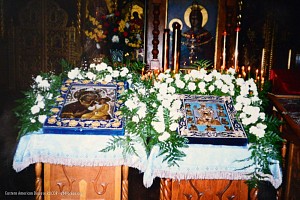 The following is an account provided by Archpriest Stefan Pavlenko, an eyewitness to how Hieromonk Michael, a resident of Optina Hermitage, had given Fr. Victor a myrrh-streaming copy of the Iveron Icon of the Mother of God. Fr. Stefan is the rector of the Church of All Saints in the Russian Land, in Burlingame, CA.

The Lord made me worthy to be at Optina Hermitage, together with Fr. Victor Potapov and his matushka, and Fr. Vladimir Boikov, and to be an eyewitness to unusual events. When our group was leaving the Monastery Skete, someone ran up to Fr. Victor and told him that the director of the Skete requested that he return. Fr. Victor and Maria, his matushka, went off. Looking through the gates, we saw Fr. Michael blessing them with the copy of the Iveron icon of the Mother of God. Some time earlier, we had been shown that Icon in the Skete. The Icon was written on a board, which had belonged to murdered Brother Jose. In Russia, an exact copy – albeit somewhat smaller in size [than the original] ‒ of the Montreal icon had been written on that board. In Optina, the copy began to stream myrrh. We witnessed this with our own eyes, and touched [the streaming myrrh] with our fingers. They entrusted the Icon to Fr. Victor's care, and told him that it was to return with him to Washington and to be kept at the Cathedral of St. John the Baptist. I thank God that I was an eyewitness to this remarkable event.

In early March 2002, Hieromonk Michael, a resident of Optina Hermitage, gave Fr. Victor Potapov a myrrh-streaming copy of the Iveron Icon of the Mother of God. Below, we present an account given by Priest Vladimir Boikov, one of the eyewitnesses to the meeting in Optina.

Today is March 6, 2002. I am with Archpriest Stefan Pavlenko and deacon Nicholas Triantafillidis in the Monastery of Venerable Sabbas of Storozhi, in Zvenigorod. I would like to share [with you] my impressions of the newly revealed copy of the Iveron Icon of the Mother of God, which was given to Fr. Victor Potapov at the Optina Hermitage.

Several days ago, our group visited Optina, and stayed at a small skete near the Monastery. Schema-Archimandrite Macarius (Bolotov), who died last year, had been the spiritual father of the skete. We arrived at the skete late Sunday evening, March 3rd. We visited Optina the next day. There we met Fr. Tikhon, director of the skete. It was in that skete that the Optina Elders had carried on their spiritual struggle. Fr. Tikhon showed us the church, where we met his assistant, Fr. Michael. Some time ago, Fr. Michael received several icon boards that had belonged to the murdered brother Jose Muñoz-Cortes. The boards, which had been kept at Fr. Victor’s house after Brother Jose’s martyric death, were given to Optina because of the great reverence in which the monks of the Monastery held Jose’s memory. At Fr. Michael's direction, an exact copy of the myrrh-streaming Iveron Icon of the Mother of God was written on one of those boards. Fr. Michael also told us that the Icon had already been streaming myrrh for three months. We were able to confirm that with our own eyes when Fr. Michael brought the Icon out of his cell and into the church. We all venerated the marvellous Icon and prayed before it. Then we bade Fr. Michael farewell, and went on to see [the rest of] the skete.

We had intended to leave the skete and return to the Monastery after seeing Venerable Elder Ambrose’s cottage. We paused before the main gates of the skete. To our surprise, someone ran out and asked Fr. Victor and his matushka to return to the skete. We saw Fr. Michael come toward Fr. Victor, hand the Iveron Icon of the Mother of God to him, and tell him that the Icon was to return with him to his parish in Washington. Fr. Victor took the Icon, and Fr. Michael turned and walked away in silence. With the Icon, we returned to Moscow the next day; from there it went to Washington.

I thank the Lord that I was made worthy to witness this event!