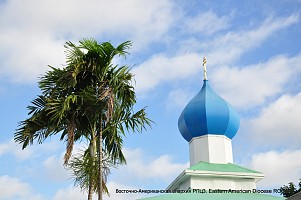 Our current 2017 year has special significant for the Russian person. We remember the events of one hundred years past, which became a critical moment in the history of Rus’. The coup of 1917, which has come to be called the Great October Revolution, directly influenced the fate of our Church. We also remember the All-Russian Local Council of 1917, and of course, the event of pan-ecclesiastical significance the restoration of the Russian Patriarchate. After two centuries of forced decapitation, the Russian Orthodox Church once more found her Primate, in the person of the Chief Hierarch Tikhon, Patriarch of All Russia.

This year also has special significance for the Russian Diaspora: we remember with particular joy the decennial of the Reunification of the Churches. This year also has special significance for the parishioners of our church, as this year marks the 70th anniversary of our parish. Many words have already been spoken about the events of ten and one hundred years ago, jubilee conferences held, and a worthy number of interesting lectures presented. In this case, I would like to draw your attention to the event that has gathered us together here, and in particular to talk about what a parish of the Russian Orthodox Church in America means for the Russian person.

As far as history is concerned, the first attempt to build a Russian Church in Miami was made in 1936, but did not succeed. Russian refugees from the time of the October Revolution and post-war years renewed their attempts to build an Orthodox Church after the Second World War. At that time, Eastern America was under the spiritual authority of Archbishop Vitaly (Maximenko). Thanks to his efforts, our parish was established. In 1947, regular divine services began to be held in a large tent on a piece of land donated to the church and situated in an uninhabited section of western Miami. Very soon, the temporary tent was replaced by a small church, which was later completed and expanded. A troupe of dwarfs, or little people, who had moved to Miami at the start of the Second World War, holds a special place in the history of the parish. Ivan and Pelagia Velikanov and Vasily and Maria Filin, after many years of serving in the altar and on the kliros, donated their property to the parish in order to financially support the church and the priest’s family. Such was the beginning and such were the first steps in the development of our parish.

As for the spiritual, ideal significant of the parish: in order to express or at least to grasp this spiritual meaning, I will turn to the speeches and sermons of the Holy Hierarch Tikhon, Patriarch of All Russia. It is remarkable that these speeches were delivered by him here in America more than 100 years ago, but they have not yet lost their relevance or significance. 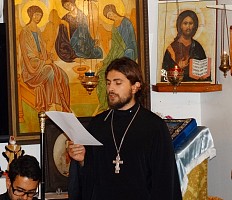 Here are the words of the then-Bishop Tikhon, which in my view describe very well one of the principal characteristics of our parish:

"…the most important thing is that the Orthodox Church accomplishes her holy mission in silence, with humility and piety, recognizing the weakness of man and the power of God. Heterodox missionaries often do not mind shouting and banging drums to call attention to their activities; they carefully document their efforts, in order that the whole world might know of their acts and offer them praise; – that is why they have so much to say. But that is not how the Orthodox bringers of glad tidings act: they embark on this holy work not to earn the glory of men, but in order to acquire mercy from God, and salvation for others. They do not sound the horn before the world regarding their successes, and do not credit themselves, but only God’s strength."

It is this very remarkable silence of our little parish, perhaps, that is one of its essential characteristics. In contrast to the chaos and busyness of modern life, here a person can stop and bring some order to his thoughts and feelings

But this silence and quietude in the parish is not simply given. In 70 years, the parish has had to survive and overcome no small number of difficulties, periods of isolation, and even attempts to split the parish. When the spirit of secularism and democracy penetrated the protective enclosure of the Church, many Local Churches as a whole – and individual parishes in particular – succumbed to their temptations. Changes began to take place in parish life. As always happens, reforms are presented with philanthropic, humanistic ideas and slogans. Out of love for the people, we will abbreviate the services; for their comfort, we will change the rubrics and the calendar; taking into account human frailty, we will ease the fasts and offer for everyone to sit during the services; and so on. Before the restoration of communion with the Moscow Patriarchate, individual small parishes had to fight to maintain their traditions, the purity of the liturgical rubrics, their very Faith. This, perhaps, represents the primary labor and accomplishment of former rectors, and of no small number of parishioners, who fought to maintain the traditions of the Orthodox Church without compromise. 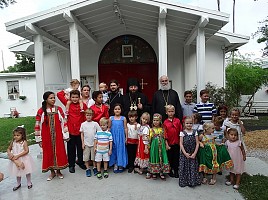 After the Reunification, the situation in church has changed noticeably. It could be said that the parish has transitioned from a defensive to an advancing position. The number of parishioners has grown, and more attention is being paid to children in the parish. Through our Saturday Russian School, we try to acquaint them with the spiritual traditions of Orthodoxу, revealing for them the beauty of the church, of the divine services. Working with the children, we have also begun to attract their parents to the education process. As one school principal noted, "Give me well-mannered and educated parents, and I will give you well-mannered and educated children."

Miami is a special city. It is, in truth, in North America, but in practice it seems more like South America. This we must be responsive to the Spanish-speaking population, which here represents a majority. This year, thanks to the efforts of our parish, [Archpriest Seraphim Slobodskoy’s] book "Law of God" was translated into Spanish and published, albeit in a limited run.

I would like to conclude my presentation with the words of the same Holy Hierarch Tikhon: "The future is hidden from the limited gaze of mankind, and we do not now know, what the ever-growing wave of Slavic emigration and the steady growth here of the Orthodox Church will mean for the life of this country. But one would like to believe that they will not remain here without leaving a trace, that they will not disappear in this strange sea, but rather that they will introduce to the spiritual storehouse of the American people that spiritual hunger – so natural to the Slavic nature and to the Russian Orthodox people – a striving for the Heavenly, an aspiration toward a universal brotherhood, a care for their neighbors, humility, feelings of repentance, and endurance…"