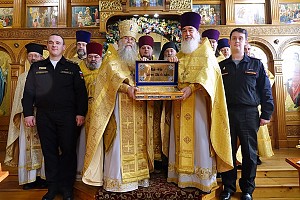 On Wednesday, December 13, St. Andrew’s Patriarchal Naval Cathedral in Philadelphia, PA, celebrated its patronal feast day. A spiritually significant and long-awaited gift for the church was a reliquary containing the relics of many saints, presented to St. Andrew’s parish by the clergy of St. Alexander Nevsky Diocesan Cathedral in Howell, NJ, with the blessing of His Eminence Hilarion, Metropolitan of Eastern America & New York, First Hierarch of the Russian Church Abroad.

Pieces of relics of 18 revered saints, obtained from monasteries in Moscow and Odessa, as well as from the diocesan cathedral itself, had been placed into the reliquary. The reliquary was delivered to the by clerics of St. Alexander Nevsky Cathedral: dean Archpriest Serge Lukianov and Archpriest Boris Slootsky. They were met by St. Andrew’s Cathedral clerics: rector Archpriest Mark Shinn and Priest Alexander Tsygankov. The clergy then took the relics into the cathedral, where they were met by a multitude of the faithful, who had gathered to honor the memory of the Holy Apostle Andrew the First-Called on his feast day.

Despite its being a weekday, a multitude of parishioners and guests gathered in the church, many of whom communed of Christ’s Holy Mysteries. Also taking part in the feast were representatives of the Russian Embassy in Washington, DC.

Upon completion of the service, Fr. Mark congratulated the clergy and parishioners with their patronal feast, and thanked Fr. Serge for the wonderful gift from the diocesan cathedral, asking to relay his sincere gratitude and joy to Metropolitan Hilarion. In response, Fr. Serge noted the importance of collaboration between the clergy of the Russian Church Abroad and of the Moscow Patriarchate, and noted also the celebrations in the American land of the decennial of the signing of the Act of Canonical Communion had begun in this very church, and here too, with the joint celebration of Liturgy on the patronal feast of St. Andrew’s Cathedral, they conclude.

The clergy served a short moleben before the icon of the Holy Apostle Andrew the First-Called and the relics of the saints. A festal luncheon was then held in the church hall, during which the clergy and faithful continued their informal interaction. 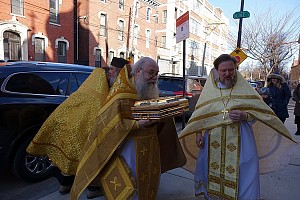