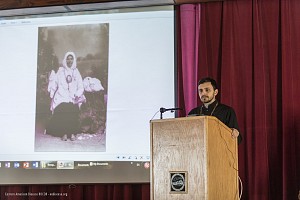 On Monday, December 25, St. Herman Youth Conference continued its work in the parish hall of Holy Virgin Protection Church in Nyack, NY. Delivering a lecture to conference participants was Priest Gennady Titov, cleric of the Diocese of Tikhvin. He spoke about the kind of people who become saints, the nature of the glorification process in the Russian Orthodox Church, and touched specifically on the life of a saint of our time – Blessed Matrona the Barefoot of St. Petersburg.

The life of Blessed Matrona is akin to that of Blessed Xenia of St. Petersburg. After the death at war of her husband, Matrona decided to dedicate the rest of her life to God. After the end of the war, the widow returned to Kostroma, where she sold her property, distributed her money to the poor, and began to wander, having vowed to assume the life of a fool-for-Christ. From that moment until her own death (33 years later), she walked everywhere barefoot, and even in the winter, "Matronushka" would wear light – and always white – clothing.

Matrona spent the last 30 years of her life in St. Petersburg, where she first lived near the city center, and later – for 16 years – at the "Joy of All Who Sorrow" Chapel of the Mother of God. Every year, several thousand people would visit the blessed woman, asking her prayerful intercession for their ailments, life’s woes, and every varied need. 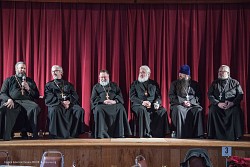 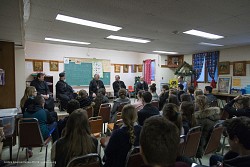 During the conference, various workshops, dedicated to the subject of the New Martyrs & Confessors of Russia and other topics relevant to today’s youth, were organized for participants.

After lunch, the young people split into groups and spoke with priests in group discussions. After these interactions, panel discussions were held, during which the clergy responded to questions that had been submitted in writing throughout the conference. Questions varied from the serious – How do I find a spiritual father? to the humorous – Which priest in the Diocese has the longest beard?

The conference concluded with a dinner, which was prepared by the sisterhood of Holy Protection parish. Archbishop Gabriel of Montreal & Canada addressed the youth with closing remarks. On behalf of the organizing committee, Archpriest Alexis Duncan expressed gratitude to the conference’s sponsors: the Fund for Assistance to the Russian Orthodox Church Outside of Russia, the Nobility Association, "Otrada" Society, parishes that had offered financial aid, and Holy Dormition Convent "Novo-Diveevo." It was also announced that preparations have already begun for the 40th St. Herman Conference, which will be held at Nativity of the Mother of God Church in Albany, NY.

After dinner, the conference participants returned to their hotel, where a talent show was held. Music by Rachmaninoff was played, church hymns and folk songs were sung, among many other presentations.

Early on Tuesday morning, December 26, the youth began to depart for home. 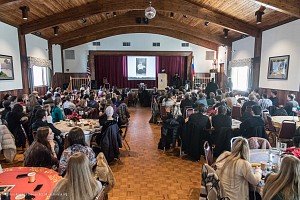