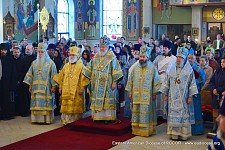 On Saturday, October 13, in Garfield, NJ’s magnificent Orthodox church, consecrated in 1984 to the Three Great Teachers and Hierarchs of the Church ‒ Basil the Great, Gregory the Theologian, and John Chrysostom, the joint pastoral conference of clerics of the Eastern American Diocese of the Russian Church Abroad and the Moscow Patriarchate in honor of the 5th anniversary of the Reunification drew to a close.

The triumphal Liturgy was celebrated by the First Hierarch of the Russian Church Abroad, His Eminence Hilarion, Metropolitan of Eastern America & New York. He was co-served by His Eminence Pavel, Metropolitan of Ryazan & Mikhailovsk; His Eminence Justinian, Archbishop of Naro-Fominsk, Administrator of the Patriarchal Parishes in the USA; and Their Graces, Eastern American Diocesan vicar Bishops George of Mayfield and Jerome of Manhattan. Singing at the Liturgy was Moscow’s Sretensky Monastery Choir, under the direction of Nikon Zhila.