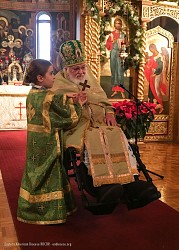 On Monday, January 15, the feast of the Repose and Second Finding of the Relics of Venerable Seraphim, Wonderworker of Sarov, and the anniversary of his ordination to the priesthood, Protopresbyter Valery Lukianov celebrated Divine Liturgy in St. Alexander Nevsky Diocesan Cathedral in Howell, NJ. At Liturgy, Fr. Valery was co-served by his sons: Archpriest Serge and Protodeacon Nicholas, while Subdeacon Alexander, Reader John, and Alexis Lukianov served in the altar.

Valery S. Lukianov was born on December 21, 1927 in the city of Shanghai, China, to the family of Symeon M. and Zoya S. Lukianov.

He arrived in the U.S. on September 23, 1950 from the island of Tubabao, Philippines. He received his higher technical education in New York City, where he graduated with honor from the Polytechnic Institute of Brooklyn. He worked in construction until the end of 1968.

He received his theological education at Holy Trinity Theological Seminary in Jordanville, NY, from which he graduated in 1975.

On February 21, 1963, the feast day of the Holy Great-Martyr Theodore Stratelates, he was ordained to the diaconate in St. Sergius Church at the Synodal Headquarters in New York City by His Eminence John, Archbishop of Brussels & Western Europe – later of San Francisco. On January 15, 1967, the feast of Ven. Seraphim of Sarov, he was ordained to the priesthood by His Eminence Philaret, Metropolitan of Eastern America & New York, First Hierarch of the Russian Church Abroad, at St. Seraphim Church in Sea Cliff, NY.

On November 1, 1968, Fr. Valery was appointed rector of St. Alexander Nevsky Church in Lakewood, NJ. He also fulfilled obediences as acting head of the Russian Ecclesiastical Mission in Jerusalem and chairman of the Arts & Architecture Commission at the Synod of Bishops.

He was awarded the Synodal Order of the Sign of the Russian Church Abroad, 2nd and 1st Class. On January 15, 2017, in light of his significant labors in the fields of pastoral work, instructional authorship, and church construction, as well as in conjunction with the 50th anniversary of his ordination, he was awarded the Order of St. John of Shanghai, 1st Class. 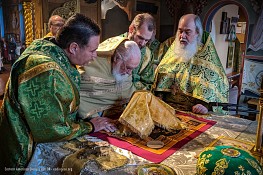 Owing to ill health, Fr. Valery celebrated his last Liturgy on Pascha 2017, and since that time has regularly – as his health allows – prayed at the divine services in the cathedral and at Our Lady of Tikhvin Church, confessing and instructing parishioners at Sunday and festal services. On Monday, this blessed and particularly special day for Fr. Valery, he wore the cross with which Metropolitan Philaret had blessed him on the day of his ordination 51 years prior.

Despite its being a weekday, a multitude of Fr. Valery’s relatives, spiritual children, longtime parishioners, and friends of the cathedral gathered for the Liturgy. Most of them communed of Christ’s Holy Mysteries.

Upon completion of the service, Fr. Valery greeted the clergy and faithful with the feast and, in keeping with tradition, addressed those gathered with a sermon, in which he spoke about the life and labors of Venerable Seraphim of Sarov.

Fr. Serge thanked the Lord God for enabling Fr. Valery to serve at the Holy Altar on this most significant day, alongside his sons.

"I think that this was a special mercy shown toward you by Fr. [St.] Seraphim, whom you have always loved, and who hasn’t forgotten you today," said Fr. Serge. "We would also like to congratulate Matushka Irene today, who is always by your side, thus making this a dual jubilee."

"Today my heart is singing, ‘Christ is Risen!’ as Fr. Seraphim would always say to those who came to him: ‘My joy, Christ is Risen! Rejoice in the Lord!’ And today we rejoice. We have gathered around the Altar and the Holy Chalice – all of your sons, joined by some of your grandsons, were in the sanctuary; your nephews and other relatives – in the choir. And today we feel that Paschal joy."

Fr. Serge noted that we can all receive a lesson from Fr. Valery’s example – never to give in.

The protodeacon then intoned the Polychronion for Fr. Valery and Matushka Irene.

Fr. Valery thanked all of those who had prayed at the service, his family, the altar servers, and the choir singers – who performed his favorite liturgical hymns – and the sisterhood, which had toiled in preparing the festal luncheon. The clergy and faithful continued their interaction over lunch in the church hall. 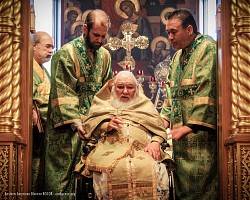