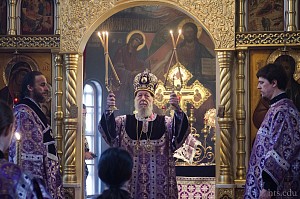 After celebrating Divine Liturgy in Nativity of the Mother of God Church at the New Kursk Root Hermitage in Mahopac, NY on the Saturday of the Great-Martyr Theodore Tyro, His Grace, Bishop Jerome, set out for Holy Trinity Monastery in Jordanville, NY, where he led the divine services for the first Sunday of Great Lent – the Triumph of Orthodoxy.

At the All-Night Vigil, His Grace led the Polyeleos and singing of the magnification for the Holy Hierarch Alexis, Metropolitan of Moscow. The monastery’s Holy Trinity Cathedral was filled with worshippers –the monastic brethren, local faithful, and visiting pilgrims – who all came to venerate the Gospel and holy icons.

His Grace delivered two sermons. The first was in Russian, on the phrase, "Blessed be the Name of the Lord," regarding the two greatest problems the faithful face in the Orthodox Church: indifference on the one hand, and fanaticism on the other. Both are opposite sides of the same coin, and that coin is ignorance. Indifference leads people to drift away from the Church, while fanaticism, based on incomplete knowledge of the Faith, leads to heresy and schism. The second was in English, on the "Anathema" service (the Rite of Orthodoxy) – what it is, and what it is not.

The Rite of Orthodoxy was intoned by monastery cleric Deacon Peter Markevich. Both the Liturgy and the Rite that followed were served in Slavonic and English.

Following Liturgy, a luncheon was served in the monastery refectory, during which a text by Metropolitan Philaret (Voznesensky) and Protopresbyter George Grabbe (later Bishop Gregory) was read, appropriate for this day.

At the conclusion of the meal, those gathered were reminded that this was the namesday of Patriarch Alexey II (+2008) of blessed memory, and "Memory Eternal" was sung.

A reception followed in the abbot’s residence, where the discussion revolved around liturgical reform and translations of texts into English.

That evening, a group of Jordanville seminarians sang at the Triumph of Orthodoxy Vespers in at Nativity of the Mother of God Church in Albany. NY. 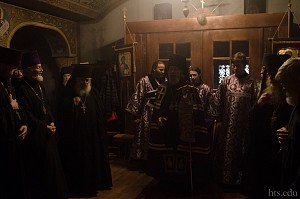