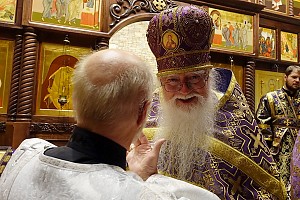 Baptized at 25 years of age in Kiev, after serving in the army, he entered a music college, from which he graduated with a major in guitar. Later on, he and his guitar headed to the Jewish Autonomous Region (Oblast’).

There I worked for a musical ensemble of the Birobidzhan Regional Philharmonic, – says Fr. Alexander. – Later, the core musicians of our ensemble founded their own group. We toured; we were invited to international festivals. This is how we traveled: three violins, a double bass, an accordion and a guitar, along with our soloist, who performed songs in Yiddish. We toured in Poland, Belgium, France, and Germany. In 1990, we went on a tour to the Holy Land. Many of our group’s musicians stayed there, and the ensemble fell apart. After that, some of us left for France, some for Germany, and there I was, unemployed with my guitar.

At that time, I had a valid American visa. I bought a plane ticket and took off. Traveling through Toronto, I made my way to Atlanta. A week later, a friend of mine brought me to a Russian Orthodox church. It was in 1991. Batushka, Fr. John Townsend, took me in, and I lived with him for 11 years. All those years, I played Brazilian and Spanish music on my seven-string guitar at restaurants. I released four disks.

– How did you begin serving in the church?

– In Atlanta, I first started by helping Batushka, Fr. John, in the church. In 2002, I was tonsured a reader; when the issue of needing another priest – who would be bilingual – arose in our parish, with the blessing of the hierarchy, I was ordained a deacon in 2009 and a priest in 2010. 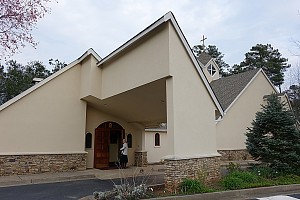 – Was your parish originally English-speaking? What is its history like?

– Yes, services were in English from the start. In 1976, Father John Townsend founded the parish of St. Mary of Egypt in Atlanta under the jurisdiction of Orthodox Church in America. In 1981, the parish purchased a plot of land, on which a church was soon built. In November 1997, when the parish came under the omophorion of Russian Church Abroad, a small number of the parishioners broke apart from it and filed a lawsuit against Fr. John. The court decided against us. We found ourselves on the street and without a church. For seven years, we rented various warehouse buildings for services and, having assembled a portable iconostasis, prayed the Lord.

In 2005, the parish purchased the vacant building of a former Lutheran church, and by its own efforts rebuilt in into an Orthodox church, where now, glory to God, we worship. Special church needs such as baptisms, weddings, and funerals are conducted in Church Slavonic, as well as in English. The Gospel is read in both languages, and I deliver sermons in two languages, and for litanies we even use Georgian.

– In terms of learning the language, is Atlanta different from New York, where people can live for over 20 years and not know how to speak the language?

– In Atlanta, people do not feel that they are immigrants. There is no such thing as a "Russian Town:" Russians live all over the metropolitan area. It is an interesting fact that not a single Russian restaurant ever got a foothold. People come here and they have to learn the English language and learn to drive. It is both necessary and practical. Just in nursing homes the elderly speak only Russian. 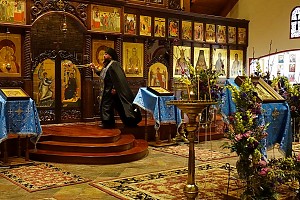 – How well did you yourself know English when you came to America?

– When I came here, I knew only 400 words. I myself counted before I left for America. I am a musician, so it was easy for me to pick up a foreign language. Additionally, I ended up with Batushka’s family, found myself in English-speaking surroundings, and there was no one around with whom I could speak Russian. I have to admit, my head hurt for about two months, but after that everything was fine.

– How long did it take before you started to deliver sermons in English?

– It simply happened, even though I was most scared of having to deliver sermons. From the beginning, Fr. John insisted on a bilingual sermon, and I followed his words. God arranged for everything to fall into place.

– All these years, you played music in restaurants. How did you manage to combine such a predominantly worldly work with serving in church?

– I played at respectable restaurants and played respectable music. Only recently, when it became possible for the parishioners to afford supporting a priest financially, I stopped working at restaurants.

I cannot say that it was an easy situation. There were some unpleasant experiences. For example, when the behavior of restaurant patrons of traditional and non-traditional orientation was borderline unacceptable. As a priest, I considered it impossible not to intervene. Of couse, the owners almost fired me for this, although they agreed with me.

Fr. John also worked until 57 years of age. He worked all day and served on the weekends. If a big holiday happened on a weekday, he got up at 5 o’clock in the morning, and at 7 o’clock already started services. 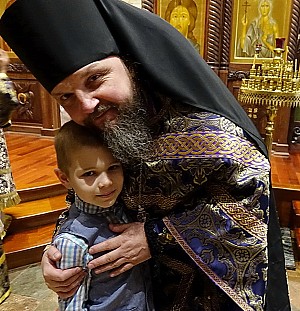 – Tell us about your parishioners.

– They are great people: engineers, computer programmers, construction workers, musicians, coaches, professional athletes. There are a lot of little ones: about 40 children. On average, 100-120 people commune on Sundays. We encourage partaking Communion often. Before they come to Communion, everyone confesses and attends the All-Night Vigil for at least a short period of time.

We baptize everyone: Russians, Americans, adults, and children. This became possible as a result of performing services in English.

Our parish in multinational. We are all friends and try to discourage conversations about politics in church. People’s opinions may differ, but we do not discuss them, because church is not the place for debating political and national issues or imposing one’s views.

– What else is discouraged at your church?

– Willfulness, arbitrariness. In our church, everything is done with the blessing of the priest. This is not despotism, but orderliness.

– How does your parish support itself?

– The church exists by the contributions of our parishioners.

– Does your church practice memberships?

– As such, membership is not a practice in our parish. But we do practice so-called financial obligations for a year. In a pledge card, one writes down how much he or she can contribute to the church for the current year. This is necessary for planning our expenses. But if people cannot fulfill this commitment, we do not call or try to force them.

We do not have set prices for special church needs. If someone needs to be baptized, we baptize them without discussing the price. But generally people make donations anyway. 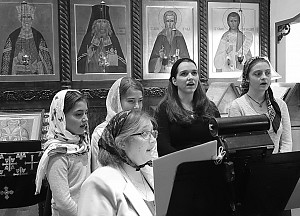 – In Russia now, they talk about so-called "burnout" of priests. The term "burnout" describes the condition when a priest loses his interest in serving, eventually resigning from duty or completely surrendering his priesthood. In your opinion, where does this "burnout" come from and what are the ways of preventing it?

– My experience is not that extensive but, in my opinion, such priests take up an overzealous approach to serving and rely only on themselves. But God’s help in serving is so evident! I, for one, do confessions from 4 to 8 in the evening with an interruption for the Six Psalms, and I do not have a minute to spare, but I practice obedience without relying on myself. When it is not me, but God, then there is no burning out or burning up.

– Where do you acquire your strength for serving?

– We just do what priesthood obligates us to do and do not question it.

– How do you envision the future of the parish?

– Over the course of the past year, two young priests and a deacon were ordained at our parish. It became necessary, since the parish is constantly growing.

Last year, with God’s help, we built a new iconostasis, replaced the roof; our next projects are a dome, church bells, and the kitchen. We make every effort to bring as many people as possible to the Lord.