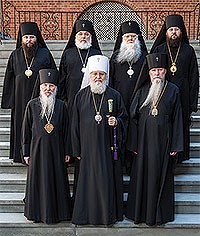 We, the members of the Synod of Bishops of the Russian Orthodox Church Outside of Russia, who carry out our ministry in North America, Europe, and Australia, behold with pained soul that in the sacred territory of Kievan Rus’, our beloved land of Ukraine, treacherous political aspirations arise once again – as has happened before in history – under the guise of religious activities, but with the evident purpose of inciting enmity and discord amongst the Orthodox people, with the intention of inciting a schism in the Church. Attempts are now being made to create, in this long-suffering land, a separate "autocephalous church" in place of the canonical Ukrainian Orthodox Church, recognized by all and headed by His Beatitude Onufry, Metropolitan of Kiev & All Ukraine. This Church has possessed autonomy since 1990 – that is to say, self-governance and independence in its administration. Before us at present is nothing other than [an insidious] effort to seize upon religious sentiments and subordinate them to the political goals of today’s authorities, directly contradicting the tradition and canonical norms of the Holy Orthodox Church.

We pray to Almighty God that the passions and troubles stirred up by the efforts of those who are alien to the spirit and grace-filled order of the Church might vanish like smoke, that dissensions may be quieted by His mercy, and that the peace of our man-loving God, risen from the dead on the third day, may reign in their hearts.

With this statement, we express our complete support for His Beatitude, Metropolitan Onufry, together with his brother-archpastors, clergy, monastics, and the faithful flock of the sole canonical Ukrainian Orthodox Church, and with love we bow before their confessor-like struggles. No alteration to the life of the Church can be initiated or imposed upon Her by secular authorities. The present attempts to influence the life of the Church from the outside reveal only the fundamentally non-ecclesial motives and goals of those attempting to implement them.

We call on all to pray for the canonical Orthodox Church in the land of Ukraine, that the present attempt at Church schism will come to naught, and that peace and brotherly love may ever prevail in the relations between the Local Orthodox Churches.