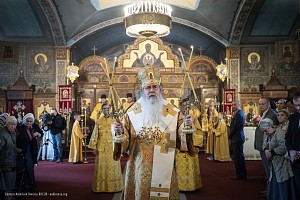 On Sunday, June 3, a joyous feast was held at Holy Dormition Convent "Novo-Diveevo" in Nanuet, NY. The feast of the Meeting of the Vladimir Icon of the Mother of God coincided with the Sunday of All Saints. The Vladimir Icon of the Theotokos housed in the convent’s main St. Seraphim Cathedral is especially revered, as it once belonged to the Optina Fathers. The founder of the monastery, Archbishop Andrei (Rymarenko) established the custom of performing a procession with the icon around the territory of the monastery.

Singing at Divine Liturgy was the St. Prince Vladimir Youth Organization choir under the direction of Reader Adrian Fekula.

At the conclusion of Liturgy, the procession began, with Fr. Alexander bringing the wonderworking Vladimir Icon of the Mother of God, blessing the buildings and cemetery of Novo-Diveevo.

The celebration was centered on the blessing of the monument to Venerable Seraphim of Sarov. The monument was sculpted by A. Leonov and donated by the fund "Dialogue of Culture – United World" under the direction of Yuri Sandulov and the Consulate General of the Russian Federation in New York.

The procession concluded before the monument of the convent’s Heavenly patron. After its consecration, Bishop John of Naro-Fominsk, Administrator of the Patriarchal Parishes in the USA, who joined the hierarchs for the procession, read aloud a greeting from Metropolitan Hilarion thanking all for their labors in erecting the monument. Metropolitan Tikhon likewise greeted all those gathered, thanking them for their joint prayers and underscoring the importance of the Novo-Diveevo Convent in the modern world.

The Consul General of the Russian Federation in New York, Sergey K. Ovsyannikov, delivered greetings and remarks from the Russian Ambassador to the United States, Anatoly I. Antonov, emphasizing the importance of spreading cultural and spiritual values of Russia in the New World.

A picnic was held for all on the grounds of the monastery.

Later that evening, a reception was held in the Consulate General of the Russian Federation in New York culminating the joyous occasion. 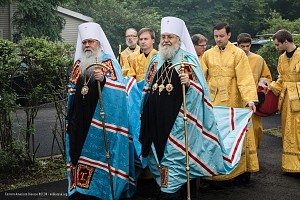