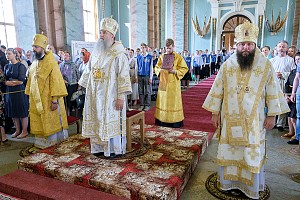 Among the worshippers were Vice Governor Igor Albin, Vladimir Ivanov (head of the Department for Relations with Religious Organizations of the Administration of the Governor of St. Petersburg), and Alexander Kщlyakin (director of the State Museum of the History of St. Petersburg).

For his diligent service to the Holy Church, cathedral Deacon Michael Senik was awarded the kalimavka.

Prayers were offered up for the repose of the Russian sovereigns buried in the cathedral.

The Metropolitan addressed worshippers with an archpastoral sermon:

"We honor today the two apostles, the pillars of the Church, who made the greatest contribution to the work of Christianity in all the world, that Christ’s work might not be extinguished, but might bear abundant fruit," His Eminence began. "They came to the Lord by different paths; we read about this in the Gospel and in the Acts of the Apostles. After Pentecost, the Apostle Peter came out into Jerusalem with a sermon, and converted thousands of people to Christ. The Apostle Paul, who later came to believe in the Lord, traveled the whole world, preaching Christ crucified and risen. Some the apostles convinced of Christ’s divinity; others, of His Resurrection. They led all to Christ, organized the Church, and founded communities.

"The Apostle Paul writes that we should emulate him as he emulated Christ," the archpastor continued. "Of course, it would be impossible for us to perform the same feats. But from him we must learn zeal in the Lord, brotherly love, and the love of which he speaks in his epistles. Nothing could separate him from the Lord: neither present, nor future, nor depth, nor height. We must learn this love from the Apostle Paul, so that no one might separate us from the Lord, and that we might always be with Him.

"We must ask ourselves: what have I done for Christianity? I care for the salvation of my soul, I go to church, I commune – and that is it. But where is our apostolic service? We must at least be witnesses to Christ for our neighbors, at least bring them to Him. They should see our life, our good works, and say, ‘How you have changed, you were a completely different person, and now I do not recognize you.’ If we will thus change, then St. Petersburg will change, as well. The city-dwellers must thank God that we have such a Heavenly patron as the Apostle Peter," Metropolitan Barsanuphius concluded.

The rector thanked his ruling bishop for their shared prayer, and presented him with an icon of the Holy Royal Family.

The cornerstone of Sts. Peter & Paul Cathedral was laid by Emperor Peter I in 1712, and constructed in 1728 according to the sketches of Domenico Trezzini. It was consecrated on July 9, 1733 by Archbishop Theophanes (Prokopovich) in the presence of members of the Synod and the Imperial House. It is an architectural monument of federal significance. It was not transferred to the diocese, but is administered by the museum of city history. Divine services are held regularly. 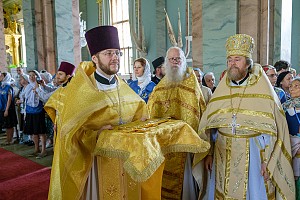