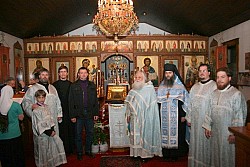 On Monday, July 23, after a brief illness, Archpriest Stephanos Shagoury reposed in the Lord.

Born in Cambridge, MA, Fr. Stephanos attended MIT and then Holy Cross Greek Seminary. He was ordained to the diaconate and priesthood by Metropolitan Maximos (Aghiorgoussis) of Pittsburgh in 1997, and served in several parishes of the Greek Archdiocese.

In 2011, Fr. Stephanos was received into ROCOR’s Eastern American Diocese and appointed rector of St. Nicholas Church in Endicott, NY. During the Diocesan Pastoral Conference in October 2012, Metropolitan Hilarion of Eastern America & New York awarded Fr. Stephanos the gold pectoral cross. In 2013, he was elevated to the rank of Archpriest for his dedicated service to the Holy Church. From 2015 until 2017, he served as a cleric of St. Nicholas Monastery in North Fort Meyers, FL. 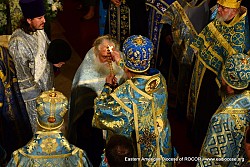 In 2018, he requested and was permitted transfer to the Antiochian Archdiocese, where he continued his pastoral and missionary labors. Though his time as a cleric of the Eastern American Diocese was brief, his brother clergy remember him as a faithful and dedicated laborer of Christ’s Vineyard, and will remember him in their prayers.

He is survived by his two children, Abraham and Sophia.