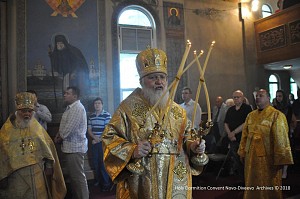 On Sunday, July 22, Metropolitan Hilarion of Eastern America & New York paid an archpastoral visit to Holy Dormition Convent "Novo-Diveevo" in Nanuet, NY, in order to celebrate Divine Liturgy and honor the 40th anniversary of the repose of the convent’s founder, Archbishop Andrew (Rymarenko; +1978).

Upon completion of Liturgy, a litiya was served for the ever-memorable Archbishop Andrew. Afterward, Metropolitan Hilarion delivered a sermon on the renowned archpastor’s life and legacy. He also drew attention to the recent fire in the monastery’s candle workshop and expressed his prayers and hope that the convent will be able to resume candle-making operations in the future.

A bountiful luncheon was then served in the parish hall. Before departing the convent, Metropolitan Hilarion visited the gravesites of Archbishop Andrew and those who labored to establish the convent.

Novo-Diveevo Convent began its history in America in the late 1940s-early 1950s, when Russian émigrés arrived from Germany and Austria, led by Protopresbyter Adrian Rymarenko. They settled in Rockland Country. They began their life in the New World with no means of subsistence, no knowledge of the English language, and no governmental assistance. But they had one desire in common – to freely worship God, to thank Him for the joy of their newfound freedom, which had been given to them by this unfamiliar and – for many – utterly unknown and incomprehensible land. Fr. Adrian’s dream was to build not only a church, but a monastery with an Orthodox cemetery, an old-age home, and a hospital.

In 1968, he became Bishop Andrew of Rockland, won a battle for this slice of Russia in the American land, and gained renown throughout the country. His opinion was highly regarded, his advice heeded; he corresponded with President Richard Nixon and New York Governor Nelson Rockefeller, as well as other politicians, scientists, and writers. Up to 50,000 pilgrims would visit the convent every year.

Archbishop Andrew (Rymarenko) occupies a special place among the hierarchs of the Russian Church Abroad. He underwent terrible tribulations in the Soviet Union, which had been seized by atheistic persecutions against the Church, and preserved faith and fidelity to his pastoral obligations. A graduate of St. Petersburg Polytechnic Institute, with the blessing of the Optina Elders he was ordained late – in 1921. The communists closed the church in his native Romny in the lands of Poltava – he left for Kiev, where he served secretly in an apartment and restored Holy Protection Convent. Remaining in hiding, he would move from one apartment to the next. Later, he fled the godless regime, serving as cathedral rector in Berlin, not suspecting that the Lord was preparing an even greater apostolic labor for him – creating a piece of Holy Rus’ on another continent, transporting beneath his ryassa a portrait of Venerable Seraphim – painted during the life of the saint – which had been rescued from the godless country.

Until his final days, Archbishop Andrew continued to lead the spiritual life of the convent, delving as much as his health allowed him into the minutiae of monastic and practical life. A Russian cemetery was established at the monastery, currently home to nearly 8,000 graves. In 1972, a retirement home was built for senior citizens. Archbishop Andrew reposed on July 12, 1978. 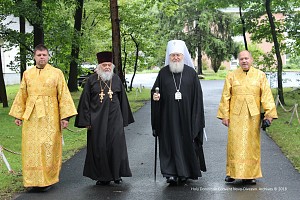