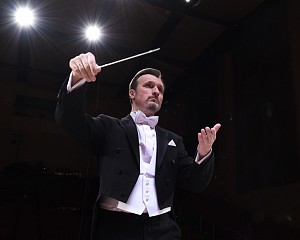 The conductor of the Holy Trinity-St. Sergius Lavra Representation Church in Moscow, Vladimir Gorbik, will conduct a concert of film scores at Adelphi University, Long Island, NY this October 19th.   On the Clayton Westermann Stage at the University’s Performing Arts Center, Maestro Gorbik’s will conduct the Capital Symphony Orchestra.  The ensemble will provide the live underscoring of film excerpts while familiar scenes are projected on a screen.  This a beginning step to foster a new institutional relationship between Adelphi and the Moscow Conservatory where Gorbik is currently on faculty.  His goals include upholding standards held in common by both cultures: excellence in education and performance as well as their societal impact.

The program, entitled The Sounds of Cinema, incorporates eight pieces for string orchestra, revealing a variety of music styles of the 20th century. Opening the concert will be the classic American work: Adagio for Strings by Samuel Barber, composed in 1936 and first performed for a New York radio broadcast under the direction of Arturo Toscanini; the accompanying film will be a premiere by an Adelphi student on environmental responsibility (see segments here: Capital Symphony Orchestra Promo). As a dramatic conclusion, Bernard Herman’s Psycho Suite will allow the audience to re-experience one of the most memorable and thrilling excerpts in movie history directed by none other than Alfred Hitchcock.   Another addition to the performance will be the world premiere Pulse, penned by Adelphi’s very own Nicholas Reeves. In fact, this collaboration between Dr. Reeves and Maestro Gorbik is the basis for creating the New York branch of the Capital Symphony Orchestra. 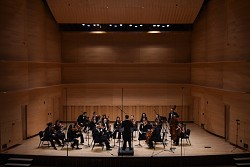 Music as a positive force in western culture provides a needed societal cohesiveness in the fractious and tribal political realities of the current day.  Vladimir Gorbik’s professional credo is to unite the creative efforts of musicians from different continents in order to exchange cultural values between East and West. He has made great efforts to build and strengthen international cooperation, understanding and friendship in our turbulent times.