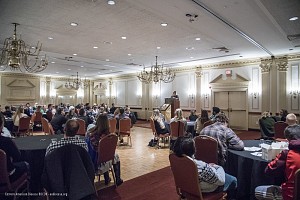 On a snowy Monday morning, December 24, the annual St. Herman Youth Conference opened in Nativity of the Mother of God Church in Albany, NY. This year over 140 young men and women are taking part in the conference, some traveling thousands of miles from across the Eastern American and Canadian Dioceses.

Greeting the youth following a short moleben, Archbishop Gabriel of Montreal & Canada, chairman of the St. Herman Executive Committee, noted the importance of the conference as a place where young people can gather yearly and interact on subjects of interest to them. His Eminence also drew attention to the significant events in the life of the Church being commemorated this year, particularly the centennial of the martyrdom of Holy Tsar-Martyr Nicholas II and the Royal Family. He expounded on the celebrations that were held in Ekaterinburg earlier in the year and encouraged the youth to visit on pilgrimage.

The same day, the youth took part in workshops discussing various subjects such as relationships, monasticism, and contemporary Orthodox issues, among others.

The youth then departed for the parish hall of Nativity of the Mother of God Church, where a bountiful lunch was prepared by parish volunteers. That evening, Archbishop Gabriel led the All-Night Vigil, co-served by parish, diocesan, and visiting clergy. 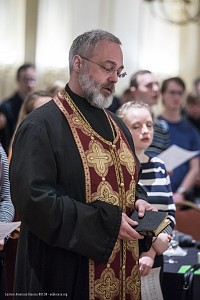