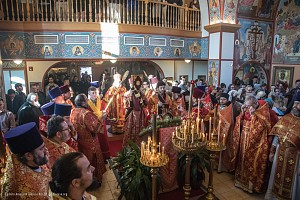 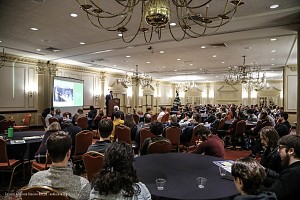 On Tuesday, December 25, the feast of Venerable Herman of Alaska, clergy and participants of the annual St. Herman Youth Conference gathered in Nativity of the Mother of God Church in Albany, NY to commemorate the feast of the Enlightener of Alaska.

Singing at Divine Liturgy was a combined choir of conference participants, under the direction of Protodeacon Serge Arlievsky (cleric of Holy Dormition Convent "Novo-Diveevo" in Nanuet, NY).

Prior to Holy Communion, Fr. Dimitri Jakimowicz (rector of St. Nicholas Church in Stratford, CT) delivered a sermon expounding on the life of Venerable Herman of Alaska.

Following a group photograph of conference participants, a bountiful lenten luncheon was served in the parish hall, where interaction between clergy and youth continued.

Later in the afternoon, conference goers were given the opportunity to ask questions of interest to them. A panel of clergy led by Archbishop Gabriel answered the various questions, ranging from finding a spiritual father to preparing for marriage, and regarding current ecclesiastical issues in the Orthodox world.

In addition to spiritually edifying discussion, the youth also had an opportunity to interact in a more informal social atmosphere in choir, photography, floristry, and sports workshops.

On Wednesday morning, Dr. Nicholas Ganson, professor of History at Hellenic College in Massachusetts, delivered a prolific lecture, entitled "Orthodox Christian Survival in an Atheistic Society: Lessons from the Soviet Past." Conference participants listened with much enthusiasm, learning more about the New Martyrs of Russia and other key figures in preserving Orthodoxy in Russia.

In the second half of the day, Fr. Dimitri Jakimowicz presented a lecture on his travels to the holy sites of Alaska, including the relics of St. Herman. Afterward, Fr. Gennady Titov presented on the life of the Abbess Thaisia (Solopova; +1915), renowned abbess of the Leushino St. John the Baptist Monastery on the Volga.

Early in the morning, December 27, the youth departed to their home parishes. 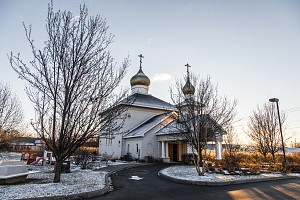