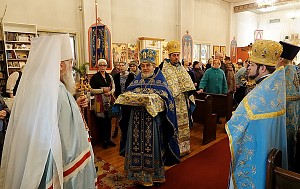 On Friday, February 15, the great feast of the Meeting of the Lord, Metropolitan Hilarion of Eastern America & New York paid an archpastoral visit to St. John the Forerunner Cathedral in Brooklyn, NY, where he celebrated the festal Divine Liturgy.

The First Hierarch was greeting by cathedral clergy, led by the rector, Archpriest Alexander Belya. Prior to the start of Liturgy, His Eminence, in accordance with festal tradition, blessed the candles.

Despite its being a workday, the church was filled with worshippers, who came to honor the great feast. The majority of them communed of Christ’s Holy Mysteries.

Upon completion of the service, Metropolitan Hilarion congratulated the clergy and faithful with the feast, and addressed the Orthodox Christians with a sermon on the history of the feast of the Meeting of the Lord. His Eminence called on those present to take joy in the fact that the Lord has come to earth, blessed our human nature, and fortified us on the path to salvation and eternal life.

Fr. Alexander thanked the Metropolitan for his prayers and didactic sermon.

"Your primatial blessing and prayers are a particular joy for all of us, because this is a source of special grace, given to us through you from the Lord."

Fr. Alexander called on the faithful to preserve the gifts received from the Lord ably and truly – in a kind heart, with piety and the fear of God.

In the church hall, the cathedral sisterhood organized a bountiful festal luncheon, during which brotherly interaction continued. 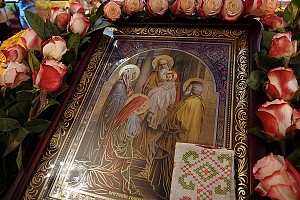