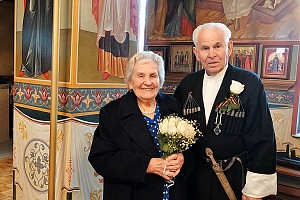 On Sunday, February 17, a celebratory moleben was served after Divine Liturgy in St. Alexander Nevsky Diocesan Cathedral in Howell, NJ, in honor of the triple jubilee of Alexander M. Pewnew, ataman of the Kuban Cossack Voisko Abroad, and his spouse, Elizabeth G. Pewnew. Present for the service were members of the Pewnew family and Cossack representatives.

"Today is an historic day not only for you, but for all of us. Today we celebrate three jubilees: you have been in America for exactly 60 years; in January, Alexander Mikhailovich, you celebrated your 90th birthday; this month, Elizabeth Gustavovna also turned 90; and this year you will be celebrating your 70th wedding anniversary.

"This is a true feat that you have accomplished in your lives, but none of it would have been possible without God’s help. For us who were born here in America, it is difficult to even imagine what you have been through. You survived Lienz and the war, came to America through Australia, started a family, and raised three sons – all of this took tremendous effort.

"At the same time, you did not lose touch with your roots: throughout these years, you have remained Russian and Orthodox, you have remained loyal to the Faith, to the Tsar, to the Fatherland. You were loyal to your Church, loyal to Cossackdom. And for this the Lord blessed you by His grace to remain together for 70 years."

Fr. Serge read aloud a congratulatory letter to the Pewnews from the Ataman of the Kuban Cossack Voisko, Nikolay Doluda, in which the latter relayed to the jubilants his sincere congratulations, and called the Pewnew family "a fine example of Cossack family traditions, where family is honored as the greatest value." He wished the spouses good health, inexhaustible love of life, peace, and well-being.

The Polychronion was intoned for the jubilants, after which a reception was held in the church hall. Also taking part in the celebrations were staffers of the Consulate General of the Russian Federation in New York City. 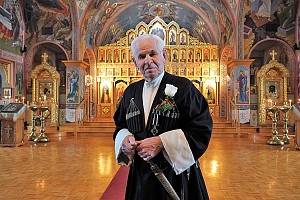