"A Procession of the Cross to Another Continent:" An Interview with Archpriest George Zelenin 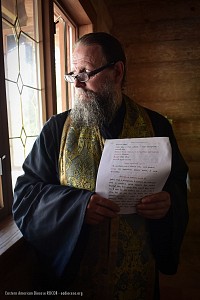 September in Moscow was uncharacteristically sunny and warm. Archimandrite Roman (Krassovsky) of Holy Trinity Monastery in Jordanville, NY – one of 34 members of a delegation from the Russian Church Abroad accompanying the Kursk Root Icon to Russia in 2009 – rightly compared these days to the period after Pascha. Archpriest George Zelenin, rector of the Cathedral of St. Michael the Archangel in the city of Paterson, outside of New York City, noted that at Christ the Savior Cathedral, even time itself seems to be perceived and flow differently. Despite the long hours standing on duty next to the Icon, singing the akathist, and standing in long lines, neither the clergy nor the people who from morning and late into the night flock to the long-awaited holy image feel any exhaustion. We spoke with Fr. George, who was one of the first among the ROCOR clergy to stand watch at the wonderworking icon in the Cathedral of Christ the Savior.

– Father George, you were one of the first clergymen to stand watch next to the wonderworking icon in the Cathedral of Christ the Savior…

– And I could sense in the presence of this holy image the same feeling of awe that I felt 20 years ago, when as a seminarian I first accompanied the Icon from Jordanville to New York City. Then I held the Icon on my lap, and you could feel the most peculiarly acute sensation that you were holding fast to the Mother of God, to her Divine Infant, and that all of Russian history was sitting there at that moment in your lap. And a particular feeling arose from this unity, as it was this Icon that had graced the chambers of Tsar Theodore I Ioannovich; the Tsaritsa Irene embroidered a riza for it by her own hands; one recalls also Prince Dimitry Pozharsky, who kept this Icon with his troops during the Time of Troubles, when this Icon was used to bless the Russian army to drive out from the Russian lands those who worked iniquity within them; one recalls also the venerable visage of Field Marshal A.V. Suvorov, the only army commander in all of history never to have lost a battle.

M.I. Kutozov prayed before this Icon, as well, when it was with the army during the War of 1812. It was around this time that the miraculous healing of the child Prochorus – the future St. Seraphim of Sarov – took place. And when all of these thoughts come alive within you, you feel yourself a part of the history of your homeland. This is the source of the awe and wholly special attitude toward this holy image.

In Moscow, meanwhile, something amazing took place. A wonderful program was put in place for our delegation, including a multitude of trips and travels to the holy sites around Moscow and in the nearby dioceses. Originally, I know, the priests wanted to visit one or another of these sites; but something unpredictable happened: after we first stood at the Icon, the priests decided they preferred remaining next to the holy image, rather than traveling away.

– Father George, did you notice a difference between how the Icon is greeted in Russia and how it is greeted in the diasporan parishes of the Russian Church?

– The visitation of the Icon abroad and its visitation to its native lands are not comparable. Here you can sense entirely what it means to live in an Orthodox country, when the many thousands of God’s people come and pray before the Icon.

There is no doubt that we in the Diaspora have an absolute need for the Icon, because – and I am deeply convinced of this – if it had not been for the wonderworking Icon of the Mother of God, then the Church Abroad would not have been able to preserve its unity. This is the very spiritual center around which the fragments of the Russian Diaspora coalesce. The Icon "of the Sign" is of the "Orans" type, which in Latin means "Praying," but for us it has become the "Hodegetria" – "Guide" ["She who shows the way," or, as it is usually translated, "Protectress" – trans.]. And this is very symbolic.

But beyond the frontiers of our homeland, there are ultimately very few of us, and every visit by the Icon is for us something very familial, a domestic feast. It is a great but tranquil joy. Here, in Russia, you are present at an entirely different triumph; you see how the Icon of the Mother of God not only protects a family, but defends the entire people. And you see this people; you see, how fifteen hundred people an hour flock to the Icon, and hear how they bring their sorrows and for what they are praying. And this, for us, is also a source of particular awe.

A great joy was also bestowed upon me during the arrival of the wonderworking Icon to Russia. I had long been searching for a friend from my youth, the artist Sergey Simakov. We had not seen one another in 20 years. By some marvelous means during my visit with the delegation accompanying the Kursk Root Icon, we found ourselves in the Yaroslavl’ Oblast in a museum where they gave me his phone number and address.

I traveled to see my friend, now no longer Sergey Simakov, but Abbot Raphael, at the Church of the Holy Archangel Michael ("in the Woods") near Uglich, deep in the forest and entirely off-road. These are places untouched by the hand of man, where one could easily capture the century before last without any changes to the scenery. Our meeting was astonishing: within a minute, it felt as if those twenty years had not even passed… I discovered that over these years both Fr. Raphael and his Matushka Elena (Anna in monastic tonsure) had enduring many sorrows. Fr. Raphael, while he was still Fr. Sergius, lost his matushka. It was their story that had been portrayed in the Russian documentaries "Anna and Raphael" and "The Rib. A Portrait of the Artist’s Wife against the Background of an Epoch;" in my view, these films demonstrate for us what love means in the life of an Orthodox person.

Fr. Raphael serves in a wonderful location and in a wonderful church, which is maintained by his labors and prayers. He lives two miles away, in the village of Zagaynovo, where he nourishes 25 people who survive, to the best of their abilities, in that wilderness: raising cows and sheep.

Thus this long-awaited, marvelous meeting was arranged for me by the arrival of our "Guide" to her native lands.

– Fr. George, the delegation that accompanied the wonderworking Icon of the Mother of God is fairly numerous. It includes hierarchs of the Church Abroad, led by Metropolitan Hilarion, as well as clergy and laity…

– As the delegation was being formed, our hierarchy took a wise approach. It included within it primarily clergy that had not taken part in the celebrations of the reunification of the Church Abroad with the Church in the homeland. This provided an opportunity for a larger number of clergy to visit Russia and to better understand the nature of Church life in modern-day Russia. And here we think of those – even though it is only a few – who have departed from us [into schism – trans.]. I spoke with many members of the delegation – priests and laymen – and all of them desire but one thing: for those who have left our ranks (and they are our sorrow) to sense even a small portion of what Christ’s Church truly is. It is, above all, the people of God who believe in Christ. And this Church is alive and will live on until the end of time. In order to perceive this, one must see and touch the people of God, who live with faith in the Savior, no matter what external circumstances they might have to endure. And any single one of those who have left can touch this grace even now, if they have but the desire. And this is our cry to them: come and see.

– Would you entertain the notion of the Icon returning to its native lands one day, to the Kursk Root Hermitage or to the city of Kursk, for instance?

– There can be no talk of the Kursk Root Icon returning permanently to Russia. After all, this would mean abandoning those Russians bereft [of their homeland – trans.], living scattered across the whole world. But the arrival of the Icon of the Mother of God in Russia for the annual September procession should become a good tradition, born from the now one and reunited Church. Today nothing is preventing the resurrection of this tradition in such a way that the procession will take place not with a copy of the Icon, but with the wonderworking image itself. And this will become a sign of the new times.

Today the home of the Icon is the Cathedral of the Mother of God of the Sign in New York City, and she travels to every diocese, around the entire world. We hope that, from now on, the holy image will visit her native lands of Kursk, where she first appeared in 1295, every year in September.

www.pravoslavie.ru
Translation by the Media Office of Eastern American Diocese