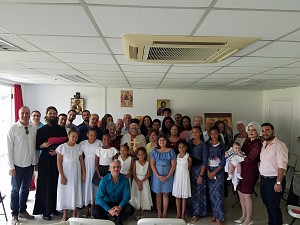 With the blessing of His Eminence, Metropolitan Hilarion, on February 5-11, Archpriest Peter Jackson (dean of the Spanish Missions Deanery) visited St. George’s, the capital city of Grenada. There he met with the local Orthodox mission and performed divine services for the community. In the coming months, the mission hopes to open a new parish under the aegis of the Eastern American Diocese.

Grenada is an English-speaking Caribbean island nation of 100,000 people. It is a former British colony whose population is mostly of African descent, about half Roman Catholic and half Protestant. It is known as the "Island of Spice," since it produces and exports much of the world’s nutmeg and mace, as well as producing cinnamon, cloves, ginger, and allspice.

The community is currently led by Reader Alexey Sitalo, a graduate of Kolomna Seminary, who is currently finishing his thesis for a post-graduate program at Moscow Theological Academy, and speaks fluent Russian and English, and is currently learning Arabic, in order to better minister to the heavy Syrian Orthodox presence in Grenada.

The first Orthodox Christians arrived in Grenada in 1970 from Syria, and they have never had a parish or priest in this island nation. Most of the community consists of Syrian immigrants. There are also Greeks and Russians teaching and studying at the local university, including the dean, and Ukrainians who live on the other side of the island. Reader Alexey believes that the Orthodox population of the island is roughly 100 souls. 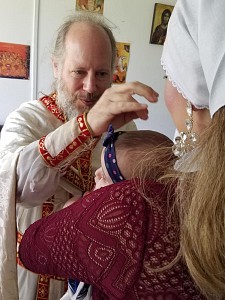 On Saturday the 9th and Sunday the 10th of February, Fr. Peter served All-Night Vigil and celebrated Divine Liturgy. In the days prior, he received nine people into the Church and performed a wedding. He also performed a large number of house blessings and blessings of businesses, which gave him a good opportunity to meet many of the faithful and encourage them to come to divine services over the weekend.

The mission was originally started by Priest George Maximov, who directs the Holy Prophet Daniel Missionary Society, which had been founded by the martyred Priest Daniel Sysoev. Fr. George made a trip to the Caribbean last summer to determine where missions should be founded. He sent Reader Alexey to Grenada, and his missionary work there has been very successful.

Reader Alexey has been holding reader services on the weekends with the invaluable help of Dr. Ian Murray, as well as laity from among the Syrians and Russians. Dr. Murray is a professor at the medical school, and a parishioner of Priest Cassian Sibley’s at Theotokos of the Life-Giving Spring Church in Bryan, TX. Dr. Murray has been in Grenada for four years and had been wanting to start up an Orthodox mission for some time; at his invitation, Fr. Cassian is planning to travel to Grenada in the coming months.

May God help the Orthodox community of Grenada!