On Bright Tuesday, April 30, the hierarchs, clergy, and faithful of the Mid-American Diocese bade farewell to their long-time ruling hierarch, Archbishop Alypy (Gamanovich). who reposed on the feast of Christ’s Glorious Resurrection, April 28.

In the evening, the body of the newly-reposed archpastor was greeted at the doors of Holy Protection Diocesan Cathedral in Des Plains, IL, the very cathedral the construction of which Archbishop Alypy had overseen. A memorial litia was served by Eastern American Diocesan vicar Bishop Nicholas of Manhattan. Afterward, Paschal Vespers were served. 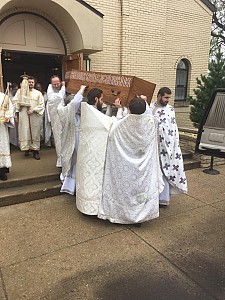 With the singing of the Paschal stichera "Let God Arise," the body of Archbishop Alypy was taken in procession around the cathedral.

Condolences were read from His Holiness Kyrill, Patriarch of Moscow & All Russia.

On Bright Friday, Archbishop Alypy will be buried in the cemetery of Holy Trinity Monastery in Jordanville, NY, per his final wishes.