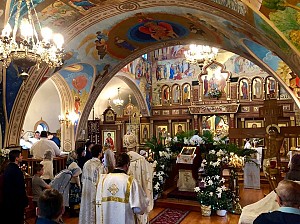 On Thomas Sunday, May 5, His Grace, Bishop Jerome, paid an archpastoral visit to St. Panteleimon Church in Hartford, CT, where he celebrated the Divine Liturgy of the Holy Apostle Mark. Concelebrating with His Grace were parish rector Archpriest Dionisy Nalitov and Deacons Alexey Pnev (cleric of the New Kursk Root Hermitage in Mahopac, NY) and Eugene Utnyukhin (parish cleric). Although this is a relatively rare Liturgy, the choir of St. Panteleimon’s sang beautifully and properly.

Bishop Jerome delivered two sermons: the first, in Russian, on the reading from Acts: God’s miracles worked through the hands of the Apostles; the second, in English, on the Gospel reading, on the establishment of "the First Day of the Week" as the New Testament Sabbath.

Liturgy was followed by the distribution of the Artos, and a rich Paschal luncheon with various appetizers, wines, a healthy main dish, and many kinds of desserts, including several kinds of ice creams, in the parish hall.

St. Panteleimon Church in Hartford was designed in 1966 by the future Bishop Daniel of Erie (+2010), when he was still known as Fr. Dimitri Alexandrow. This church is modelled on the characteristic Muscovite houses of worship from the 17th and 18th centuries, of red brick with five small domes. There had been several issues connected with the project: in those days, some argued that the new church should be in a suburb rather than in Hartford proper, and Fr. Dimitri argued persuasively that the Hartford parish should be in Hartford and not elsewhere. The old church had been a remodeled former Shriners’ lodge, and was not too suitable for its purpose. The site located for the new church was a predominantly Italian-American neighborhood in those days, and the neighbors would have welcomed an Italian Catholic church, but not a Russian Orthodox church, so the next step was overcoming those objections. Finally, when approval was given, there was a rush to complete the detailed plans during a "grace period" before new zoning laws went into effect, and Fr. Dimitri had to rush to get the papers ready in time. This all came up during the first week of Lent that year, which again was not the easiest or most propitious time frame. Finally, there were various problems during construction. The pastor in those days was Fr. Michael Belinsky of blessed memory, and the warden was Mr. Sinegursky, whose widow later became a regular parishioner in Mahopac, and reposed only last year.

This year, the feast of the Holy Apostle Mark falls on Wednesday, May 8, which again was not the easiest time for many of the church members, and it was decided to combine the Sunday of St. Thomas with the Liturgy (rather than the service in his honor) of St. Mark. 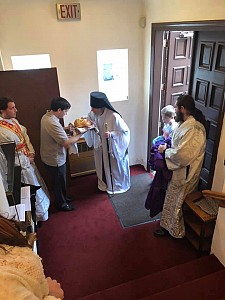