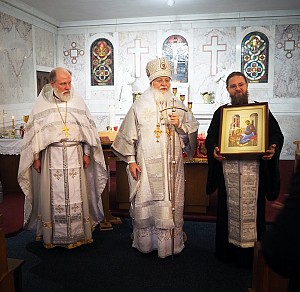 The divine service was held in a chapel belonging to St. Rose of Lima Roman Catholic Basilica. Upon completion of Liturgy, His Eminence addressed the basilica’s pastor, Fr. James A. Kuroly, with words of thanksgiving for the help he has offered to the Russian Orthodox mission. Metropolitan Hilarion presented St. Rose of Lima parish with an icon of the Holy Apostle and Evangelist Mark. In response, the pastor thanked His Eminence, and in turn presented him with a book of prayers by St. Francis of Assisi.

After a joint luncheon, the pastor showed the Metropolitan the basilica, the school, and the smaller chapel, where the newly formed mission of the Russian Church Abroad usually conducts its services.

For many years, the Orthodox Christians living in this far-flung region of the megapolis waited for a church to open near them. On March 3, the newly formed mission parish held its first service. During the first week of Great Lent and Passion Week, the faithful had an opportunity to pray at all of the appointed divine services. About 60 believers came for the Paschal procession, while about 40 prayed until the end of the festal Liturgy. Elderly parishioners were offered transportation, so that they would make it home at night.

Currently, services in the mission are being held regularly: evenings services on Saturdays, and Divine Liturgy on Sunday mornings and all major feasts.

The mission rector and parishioners thanked Metropolitan Hilarion for his visit and joint prayer on the day of their patronal feast. 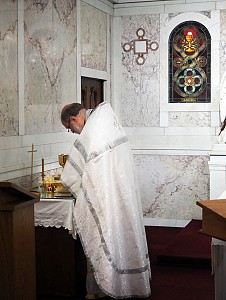