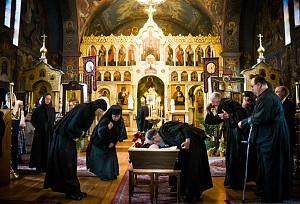 On Tuesday, May 21, the feast of the Holy Apostle & Evangelist John the Theologian, the eldest inhabitant of the Holy Trinity Monastery in Jordanville, NY, Lev I. Pawlinets, reposed quietly in the hospital after a brief illness. He was 102 years old.

Lyovushka, as he was affectionately known, was born the year of the communist revolution in Russia, in Moscow, in 1917. His parents were of the intelligentsia, his father being a lawyer. His family left their homeland with General Wrangel in 1920 through Crimea, and made their way to Yugoslavia, where so many immigrants found a welcome refuge through the graces of King Alexander. At the same time, the Synod of the Russian Church Abroad was also given refuge there, and one can state without exaggeration that Lev’s life was closed tied to the center of Church life, first in Belgrade, Serbia, and ultimately in Holy Trinity Monastery in Jordanville.

Tragically, Lev’s father died young of tuberculosis, and about at the same time, Lev was stricken ill with meningitis. At the same time, his brother, who was a pilot, died in an accident. Due to this illness, Lev remained mentally underdeveloped, which afflicted him throughout the rest of his life. His mother, Nadezhda, was not able to take care of him due to her difficult economic circumstances and sent him to the Monastery of St. Job of Pochaev in Ladomirova, Slovakia. He was placed by her on a train with a sign on his back, "To the monastery." Fortunately, he arrived at the monastery, which had been founded by the ever-memorable Archbishop Vitaly (Maximenko; +1960) in the 1920s as a place of refuge for Russian Orthodox monks and which had become an important place of ascetic struggle and missionary work not only among the local peasantry, which was returning to their ancestral Orthodox Faith after enforced uniatism, but also as a place of printing of Church books and literature for the entire Russian Diaspora.

Lev Ivanovich lived among the monks, and when the Red Army advanced on the area toward the end of World War II, Lev fled along with most of the fathers to Prešov, then Bratislava, and eventually to Germany. After the end of the war, most of the brotherhood found refuge in Switzerland.

At the same time, Archbishop Vitaly was doing his utmost with the help of friends to have the fathers emigrate to America. In November, 1947, fourteen monks and lay brothers, including Lev Ivanovich, arrived in Jordanville and in the ensuing years provided for the rapid expansion of the monastery through their labors, as well as the founding of Holy Trinity Theologian Seminary. At the monastery, Lev Ivanovich’s main obedience was working in the cow barn. He labored there for around over forty years. Later, when the monastery sold its cows and shut down the dairy, he worked in the kitchen until he was no longer able to do physical work.

After the war, Lev Ivanovich’s mother, Nadezhda Pawlinets, became a nun at Holy Dormition Convent "Novo-Diveevo" in Nanuet, NY, being tonsured a nun with the name Natalia. She reposed in the Lord in 1976. Lev would always ask people to pray for his mother’s soul.

In the last twenty years or so of Lev’s long life, when he was no longer able to do physical work, he passed his time talking to the monks, the seminarians, and the many pilgrims of the monastery. For this reason, and due to his very long life at the center of church life, Lev was probably one of the best-known people of our Church, this despite his simplicity and foolishness. He often liked to recount how he knew Metropolitans Anthony and Anastassy, and also St. John (Maximovitch) of Shanghai & San Francisco. He actually knew the latter as "Misha," and remembered when the future saint sold newspapers in Belgrade. He loved to imitate his voice, as well as the voices of other well-known hierarchs and personalities.

Lev Ivanovich was rarely ever ill. It seemed he would live forever. However, the last couple of weeks he did succumb to an infection. However, up until just a few days before he was hospitalized for the final time, he was still sitting by the coffee urn and chatting with whomever passed by. He often loved to sit outside the seminary dormitory to visit with the seminarians. Many generations of seminarians remember his antics with affection.

A few days before his repose, Lev was hospitalized with an infection, from which his elderly body could not recover. He was accompanied in the hospital by one of the senior hieromonks, who prepared him spiritually for his last journey. He reposed in the Lord around 4:30AM on May 21. The next day, on the feast of Mid-Pentecost and the Translation of the Relics of St. Nicholas, three bishops, including the First Hierarch of the Russian Church Abroad, and a multitude of priests, both of the monastery as well as visiting priests, even coming from Australia, and a large number of pilgrims and neighbors, accompanied Lev Ivanovich on his last path.

Monastery abbot Bishop Luke commented that this was truly an event typical of the Russian Church Abroad. Where else would you have three bishops, including the First Hierarch, and so many clergy and faithful, serve and attend the funeral of someone who, in the world’s eyes, was so lacking of what could be called social graces and attributes?

Those who have lived in the monastery for any length of time will sorely miss Lyovushka, as he was such a personality for so many years and a real part of the monastery’s history. May our Risen Lord grant Lev rest among the saints, including our reposed fathers and brethren in the Lord, and may his memory be eternal! 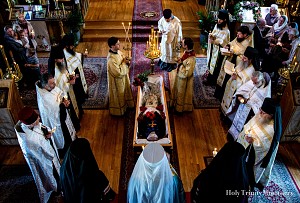