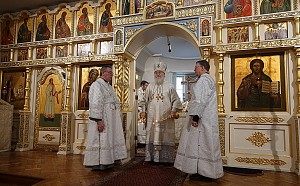 On Thursday, June 6, the great feast of the Ascension of the Lord, Metropolitan Hilarion of Eastern America & New York celebrated Divine Liturgy in the Synodal Cathedral of the Sign in New York City. Concelebrating with the First Hierarch were Archpriest George Lapardin (rector of Sts. Peter & Paul Cathedral in Strathfield (Sydney), Australia), and Archpriest Edward Chervinsky and Protodeacon Nicholas Mokhoff (cathedral clerics). The choir sang the divine service under the direction of conductor Matushka Eugenia Temidis.

Despite its being a weekday, a large number of cathedral parishioners came to pray in church. Many of them communed of Christ’s Holy Mysteries.

Upon completion of the service, His Eminence congratulated the clergy and faithful with the feast, and said, in part:

"After His Resurrection, the Savior instructed His disciples how to govern the Church, how to teach the faithful, and assured them that He would not abandon them and would always be with them, and from the Father would also send them the Holy Spirit, Who would always strengthen them… Today we remember how the disciples gathered on the Mount of Olives, where Christ the Savior gave them his final instructions and, blessing them, ascended to Heaven."

Metropolitan Hilarion wished all those gathered in church firm faith, and called down God’s blessing upon them. 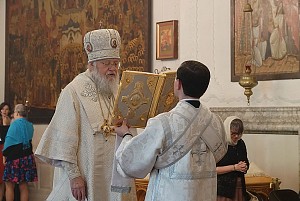