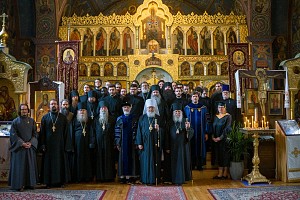 On June 2, the Sunday of the Blind Man, Holy Trinity Seminary in Jordanville, NY held its annual commencement ceremony. With God's grace, the seminary had the joy of graduating three seminarians in the Class of 2019: Milan Dragisic (Valedictorian), Milos Bozic, and Dragan Vujicic.

Commencement exercises began after a Hierarchal Divine Liturgy, concelebrated by His Eminence Hilarion, Metropolitan of Eastern America & New York, and His Grace, Eastern American Diocesan vicar Bishop Luke of Syracuse (rector of the seminary). After the service, a moleben was offered in thanksgiving for the seminary’s successes and in supplication for blessings on all those who help perpetuate the institution.

Once these thanksgiving prayers were offered, the faculty, administration, and seminarians went in procession from Holy Trinity Cathedral to the Seminary Hall, where the formal graduation ceremony took place. As the official commencement speaker, Bishop Luke spoke of the need to integrate all of the facts learned in academics into the wisdom of a complete Orthodox Christian life and continual growth in communion with God. If this does not happen, these facts become mere trivia. This distinction is crucial in the current technological environment, where the flood of trivia drowns useful knowledge and creates an absolute state of distracted dissolution, ultimately seducing its victims to treasure "nonsensical information" and become "boring babblers" who are empty of the grounding, eternal Truth of Christ.

Holy Trinity Seminary, on the other hand, facilitates this integration by providing a spiritual anchor to intellectual knowledge through the Church services, in which theory is embodied into practice. This training of spirit, mind, and body will create the internal strength necessary to exist in the world without coexisting with it. Through the discernment granted by the Wisdom from Above, an Orthodox Christian will be able to navigate the differences among existence, coexistence, and isolation. Maintaining an internal disposition of isolation from the sinful temptations that threaten to shift one’s love for God into love for the world, the individual can exist in the world without falling into the compromises of a relativism that destroys the very definition of truth itself.

The relativism that results from this compromising co-existence is simply a modern manifestation of the devil’s ancient tactic revealed during the times of Moses in Balaam’s attempt to sabotage the Israelites. Bishop Luke emphasizes that "the Moabite king Balak summoned the magician Balaam to cast a spell on the Israelites in order to defeat them but he could do nothing but praise them. Finally, he whispered into the ear of the king, ‘Get them to worship idols and fall into sexual immorality and God will abandon them and you will defeat them.’"

Finally, with internal isolation and integration and a refusal to simply "go with the flow" and coexist, Christians can exist in the world according to the love of God and love of neighbor, purified of self-seeking and establishing a "good reputation with outsiders." This is the key to attracting others to a vibrant Church constituted by Truth, Goodness, and Beauty, rather than one that exclusively focuses on preservation.

After Bishop Luke’s speech, the graduating class received a blessing from Metropolitan Hilarion, and their diplomas. This celebration continued with Milan Dragisic’s valedictory address. He spoke about his four years at Holy Trinity Seminary. Although it was difficult and its rigor required maintaining discipline and balance between private and family life and the academic and spiritual life, ultimately his time at Holy Trinity was the best of his life so far. He emphasized that many seminarians get stuck obsessing about the difficulties of their life and this prevents them from experiencing the consolation, stability, and hope of Christ, an experience that is reinforced by the academic and Church life of the seminary.

After honoring the graduating class, the lower classmen were also honored with prizes for excellence and diligence:

As a surprise, Archpriest Alexander Webster, Ph.D., Holy Trinity’s current dean, received an official Gramota from the Synod of Bishops in anticipation of his retirement as dean in August 2019. He was also bestowed the title of Professor Emeritus. His many achievements during his tenure include the establishment of the new Master of Divinity program. In gratitude for this major advancement of Holy Trinity Seminary, the St. Justin Martyr M.Div. Student Assembly gifted him with a Pectoral Cross.

Uncharacteristically caught off guard, Fr. Alexander thanked everyone by observing that the older he gets, it is not the ideas, places, events, struggles, or achievements that he remembers with fondness, but rather the persons he has known and cherished. Jordanville will provide, he said, in the years to come back home in Virginia, God willing, unforgettable memories of the monastics, seminary administrators, faculty, and seminarians, and even the many regional families and individuals who frequent the liturgical services and constitute the "penumbra" of the monastery community. 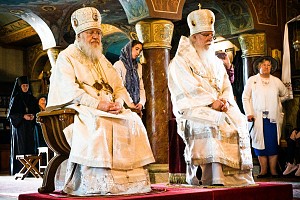