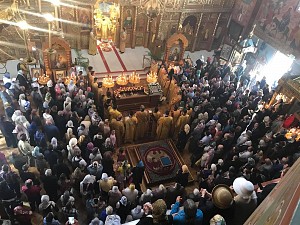 On Friday the 28th and Saturday the 29th of June, the Diocesan Cathedral of the Mother of God "Joy of All Who Sorrow" in San Francisco, CA hosted the celebrations of the 25th anniversary of the glorification of the Holy Hierarch John, Archbishop and Wonderworker of Shanghai & San Francisco.

Leading the festivities was His Eminence Hilarion, Metropolitan of Eastern America & New York, First Hierarch of the Russian Church Abroad, joined by Archbishops Mark of Berlin & Germany, Kyrill of San Francisco & Western America, Gabriel of Montreal & Canada, Bishops Irenei of London & Western Europe, Eugene of Nizhny Tagil & Nevyansk, Paisie of Lugoj (Romanian Orthodox Church), Theodosius of Seattle, and Nicholas of Manhattan, clergy of the cathedral and clerics of other Local Orthodox Churches. The Archbishop’s Choir sang joyously under the direction of Vladimir Krassovsky, and the cathedral was filled with a multitude of parishioners.

During the Little Entrance, Abbot James (Corazza) was elevated to the rank of archimandrite, and Priest Sergey Kiryukhin was awarded the golden pectoral cross by the Synod of Bishops. His Grace, Bishop Irenei, delivered the sermon before Holy Communion. After the service, a moleben to St. John was performed, followed by a procession around the diocesan cathedral.

The archpastors, clergymen, and worshipers then shared a festal banquet at San Francisco’s Russian Center, sharing memories of the holy man and about his life and miracles. 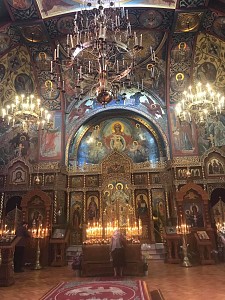