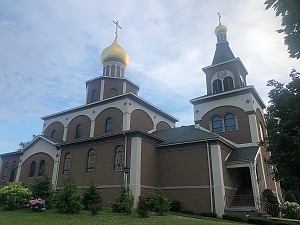 From July 12-14, Metropolitan Hilarion of Eastern America & New York performed an archpastoral visit and led the centennial jubilee celebrations of the Old Rite Church of the Nativity of Christ in Erie, PA. On Saturday, July 13, His Eminence served the All-Night Vigil, and on Sunday, July 14, celebrated Divine Liturgy.

The parish of Holy Nativity Church was firstly established in 1916 by Russian Old Rite immigrants, arriving in the United States in the second half of the 19th and 20th centuries. These were priestless Old Rite believers, known as "shore-dwellers." Many of those arriving immigrants settled in Erie, where there were jobs in mines and pulp mills. The factories were situated at the time on the shores of Lake Erie, north of the current church. Around 1916, community leaders decided to build a church. The first church was built in 1919, and dedicated to the feast of the Dormition of the Mother of God.

In the early years of the parish, the community kept both the original Old Believer traditions and the Russian language. But the Second World War led to the Americanization of the parish. Men shaved their beards, women cut their braids, and almost all of the children began to speak only in English with their families.

The current rector of the parish, Fr. Pimen Simon, became the "preceptor" of the community in 1976. At that time, the parish was rapidly declining, as the English-speaking faithful did not understand their Faith, because they did not understand Church Slavonic. After much deliberation and discussion, Fr. Pimen decided that the parish needed to introduce English into the church services. This occurred in 1980. Two years later, also after careful study of the schism in the Russian Orthodox Church in the 17th century and the consequences of losing clergy, Fr. Pimen came to the conclusion that the parish must do everything possible to reunite with the fullness of the Church. Almost 80% of parishioners voted for unification with the Russian Church Abroad.

More information is to come on the diocesan website in the future, about how the parishioners of the Nativity of Christ Old Believer Church in Erie live and pray. On the feast, upon conclusion of Liturgy, Metropolitan Hilarion, Bishop John, the clergy, parishioners of the church, and guests – bearing icons and banners – processed around the church and the block. A short moleben was served to Christ the Savior in honor of His Glorious Nativity, to the general singing of the clergy and parishioners.

Metropolitan Hilarion congratulated the clergy and parishioners with the momentous and joyous feast – the parish centennial.

Then, in the parish center, Metropolitan Hilarion and Bishop John met with the rector and members of the parish council, during which they discussed current issues facing the parish.

That same evening, a grand reception was held on the occasion of the parish’s jubilee, which was attended by Erie Mayor Joseph V. Schember, and heads of city services, who have been collaborating with the church for many years.

A film was shown, prepared by the parish for the clergy and guests, devoted to the arrival of Old Believers and the history of the parish and the church. Participants concluded the celebration with magnificent vistas of the sunset over Lake Erie. 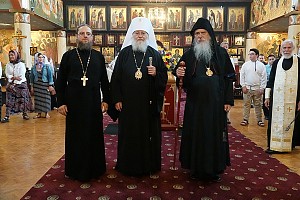