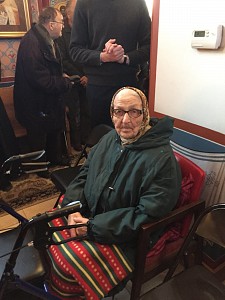 On Monday, August 12, Nina M. Soloviev, longtime parishioner of Holy Trinity Monastery in Jordanville, NY, reposed in the Lord. She was 95.

Nina was born on October 18, 1923, in the village of Vyshemir, Rechitsa Region, Gomel Oblast in Belarus. She completed eight years of schooling. Her father, Michael Ivanovich, was imprisoned for refusing to remove their holy icons from the house. He was only able to return home thanks to a Luftwaffe bombardment and the destruction of the prison in which he was incarcerated. The Germans burned down their village and took both the population and their livestock away. Nina Mikhailovna found herself with her family in Germany and worked in forced labor, tried to flee, was captured, beaten, and sent back to work.

After the war, she emigrated to Brazil and was an active parishioner at the church in São-Paolo. She later moved to the U.S. and worked to establish the parish of the Protection of the Mother of God in New Brunswick, NJ. From 1962-1972, Nina was the head sister at the parish, and her husband, Trofim Ivanovich Soloviev, was the warden.

In 1973, she and her husband moved to Jordanville, NY, where she became one of the senior parishioners of Holy Trinity Cathedral. For as long as she was able, she laundered the church vestments, and continued to decorate the church on Passion and Bright Weeks. She was known to several generations of seminarians, for whom she would prepare holiday feasts at her home. All of her children remained Orthodox and continue to rear their children in the Faith. Her son, Fr. Michael, serves as a protodeacon in Nativity of the Mother of God Church in Albany, NY.

Translated from the original Russian lecture:
"The History of the Russian Church Abroad in Portraits of Her Faithful Servants"
Deacon Andrei Psarev
www.rocorstudies.org