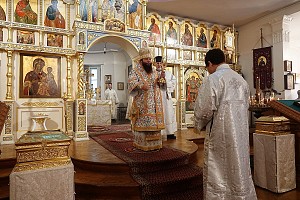 The service was held under the aegis of the Protectress of the Russian Diaspora – the Kursk Root Icon of the Mother of God. The choir sang under the direction of conductor Matushka Eugenia Temidis.

Many cathedral parishioners gathered to pray at Liturgy and venerate the wonderworking icon of the Most Holy Theotokos, which on the morrow would depart for a 10-day trip to Russia’s Saratov Metropolitanate. Most parishioners communed of Christ’s Holy Mysteries.

Bishop Nicholas congratulated the clergy and faithful with the approaching great feast of the Transfiguration fo the Lord and with the Sunday resurrectional feast, and reminded them that on this day the Holy Church honors the memory of the Holy Martyr Eusignius, who lived in Antioch in the late 3rd and early 4th centuries. His Grace reminded parishioners of the need to read and know the Lives of the Saints, and spoke on the life of St. Eusignius, who for 60 years served in the military of the Roman emperors, and was a converser with St. Basiliscus, eventually writing of his martyric struggle. At the beginning of the reign of St. Constantine the Great, the Martyr Eusignius witnessed the appearance of the Cross in the sky, foretelling the emperor’s victory. Achieving old age, St. Eusignius left for his homeland, where he spent his time in fasting, prayer, and visiting the churches of God. In 362, during the reign of Julian the Apostate, who sought to restore paganism, St. Eusignius was informed upon by a citizen of Antioch and given over to trial by the emperor. The saint denounced him for his apostasy from Christ, and at 110 years of age was beheaded on Julian’s orders. 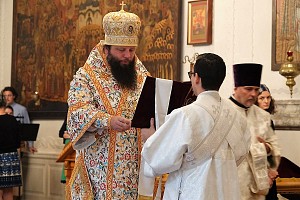