Every family has its special and joyous dates and holidays. The main holidays of the parish family of St. Seraphim Memorial Church in Sea Cliff, NY are its patronal feasts. These are days when the Holy Church specially honors the memory of Venerable Seraphim, Wonderworker of Sarov: January 15, the day of his repose (1833), and August 1, the day of his glorification and the finding of his holy relics (1903). St. Seraphim Memorial Church also specially honors May 17 and the feast of the Ascension of the Lord – the day of the Restoration of full brotherly communion within the one Russian Orthodox Church. In addition, the parishioners and worshippers of St. Seraphim Church also triumphally celebrate the memory of the Holy Great-Martyr Panteleimon, Heavenly patron of a chapel in Kittatinny, NJ, attached to the parish.

On Thursday, August 1, the feast of Venerable Seraphim, a large number of the faithful gathered despite the workday. The church was filled with worshippers, both young and grown. The festal hierarchal service was distinguished by its unusual majesty and profundity. The triumphally joyous setting united all of the participants of the feast. Their faces shone with joy and accord. The evening prior, in the presence of the Kursk Root Icon of the Mother of God "of the Sign" – before which the boy Prochorus Moshnin, the future Venerable Seraphim, was healed – the All-Night Vigil was served with the Litia, blessing of breads, Magnification, and popular singing of the akathist to the saint. Upon completion of the service, parish rector Archpriest Serafim Gan invited all to a large reception at his home, organized by his wife and his mother and which proceeded in a friendly atmosphere.

Leading the divine services for the patronal feast was His Grace, Eastern American Diocesan vicar Bishop Nicholas of Manhattan, co-served by the parish rector and local and visiting clergy, including Priest Gennady Titov (cleric of the Diocese of Tikhvin), accompanied by the exultant singing of the parish choir under the direction of N.M. Miro. Praying at Divine Liturgy and receiving Christ’s Holy Gifts was Protopresbyter Leonid Kishkovsky (rector of neighboring Our Lady of Kazan OCA Church in Sea Cliff). Prior to the blessing at the Little Entrance during Divine Liturgy, His Grace, Bishop Nicholas, read aloud the prayer for the blessing of the frescos, which here are dedicated to the history of the Russian Orthodox Church and the end of division within Her, sprinkling the church walls with holy water.

Located in the center of the church were the Kursk Root Icon of the Mother of God and a prerevolutionary icon of Venerable Seraphim with a piece of his holy and much-healing relics.

In his festal sermon, His Grace called on those gathered to follow the example set by St. Seraphim who, himself following the Gospel commandments, preserved a spirit of peace, was always gracious, and abode in a state of joy in Christ’s victory over sin, evil, death, and all of the terrible things brought forth in the world. After the moleben and procession around the honoree church, Bishop Nicholas congratulated the rector, clergy, and parishioners with their patronal feast. On behalf of the First Hierarch of the Russian Church Abroad, he presented benedictory gramotas to LV. Krassovsky, S.A. Jarostchuk, E.I. Kallaur, A.A. & I.G. Kvartirov, and to the parish sisterhood, led by E.M. Mikheev. In response, the parish rector expressed his deep appreciation to Bishop Nicholas for his archpastoral presence "on this chosen and holy day" for St. Seraphim parish, the father-concelebrants, altar servers, singers, sisterhood, and all who took part in the feast; he presented His Grace with an icon of Venerable Paisius of the Caves, also celebrated on this day, and congratulated him on the 5th anniversary of his hierarchal consecration. Presented in absentia to Metropolitan Hilarion of Eastern America & New York was an icon of Venerable Nectarius of the Caves, on the occasion of the approaching 35th anniversary of His Eminence’s archpastoral service.

Concluding, Fr. Serafim noted: "God has graced us with this magnificent church adorned with iconography that possesses a special significance, and with a life in the church, but this is not any accomplishment of ours. We are Orthodox by God’s grace; the Mother Church has made us Orthodox through Baptism, but from there our path to Holy Orthodoxy has just begun, and is beset by struggle, most importantly against oneself. Orthodoxy is private and parochial, and experienced Orthodoxy must be taken by force. Thus, we greatly hope that today’s festal prayer, participation in the Eucharist, and the glorification of St. Seraphim’s memory on the very altar table dedicated to him, will like the sharp blade of the surgeon make us now new, renewing our strengths, fortifying us in faith and hope, and confirming us on the path of the Church."

The feast concluded with a traditional and bountifully hospitable luncheon, prepared by the sisterhood. In his speech at lunch, Bishop Nicholas especially noted the participants of the pilgrimages to the Holy Land organized by the parish of St. Seraphim Memorial Church, and expressed his joy at the fact that the patronal feast unites not only the parishioners and worshippers of this parish, but also pilgrims from other churches. In his deeply heartfelt speech, Protodeacon Paul Wolkow (parish cleric) congratulated the rector with his namesday, presenting him with a gift on behalf of parishioners. Archimandrite Elevferiy (Skiba; dean of Our Lady "The Inexhaustible Chalice" Church in Brooklyn, NY) congratulated Bishop Nicholas on the most recent anniversary of his ordination to the priesthood, which had been performed by His Eminence, Metropolitan Hilarion, in St. Seraphim Church on its patronal feast in 2012. Archpriest Alexandre Antchoutine (dean of Long Island & the Hudson Valley) offered warm words of greeting to the church rector, clergy, and parishioners. On behalf of the parish council of St. Seraphim Church, A.S. Slobodskoy, son of the renowned author of "The Law of God for Study at Home and School" and the parish’s rubrician and longest-serving cleric, congratulated Fr. Serafim and his wife Matushka Irina on their 25th wedding anniversary, wishing them many years of happiness and good health. Concluding the luncheon, the parish rector expressed gratitude to His Grace, the clergy, subdeacons, altar servers, singers, sisterhood, and his wife, wishing the, all a peaceful spiritual state, mutual respect, patience with and brotherly love for one another; for around those who possess these attributes "thousands shall be saved."

The radiant memory of the beloved saint continued to illumine the souls and hearts of the faithful. This day was a wonderful opportunity to remember how important it is to live in peace, and to always be in a state of preparation to thank God for the countless blessings He gives us in life. The life of Venerable Seraphim inspired the people to actively strive for salvation, to bear the joy of the Resurrected Christ with all of one’s life, with all of one’s works, great and small. May the Lord aid us in this! 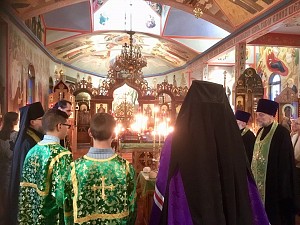