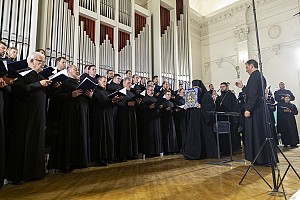 On Thursday, August 22, a concert sung by the joint male choirs of the U.S.-based Patriarch Tikhon Russian American Music (PaTRAM) Institute, the Moscow Metochion of Holy Trinity-St. Sergius Lavra, and the Saratov Hierarchal Choir was held in the Great Hall of the Saratov State Conservatory under the direction of renowned conductor Vladimir Gorbik.

More than fifty singers arrived in Saratov from various countries to record a CD of spiritual hymns dedicated to the Most Holy Theotokos.

Before the start of the concert, the wonderworking Kursk Root Icon of the Mother of God was brought into the hall, during which the audience and concert participants sang the troparion to the holy image.

The concert was attended by Metropolitan Longin of Saratov & Volsk, Bishop Nicholas of Manhattan, clergy, donors, cultural figures, and parishioners of Saratov’s churches.

Bishop Nicholas, guardian of the Kursk Root Icon, greeted those gathered. He expressed hoped that this concert will serve as a means of spiritual enlightenment, and congratulated all with the momentous day. 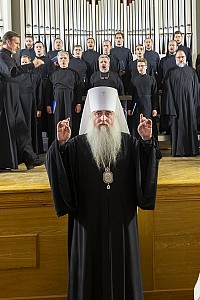