Kursk: Kursk Root Icon of the Mother of God begins Visit to Russia 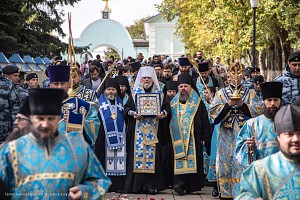 On Friday, September 20, a delegation of the Russian Church Aboard, led by His Grace, Eastern American Diocesan vicar Bishop Nicholas of Manhattan, began their pilgrimage to Russia, accompanying the wonderworking Kursk Root Icon of the Mother of God.

Upon the delegation’s arrival at Moscow’s Sheremetyevo International Airport, the clergy and those accompanying them were taken to Kursk by plane. The icon was greeted in procession led by His Eminence Herman, Metropolitan of Kursk & Rylsk. Metropolitan Herman then served a moleben, co-served by Bishop Benjamin of Zheleznogorsk & Lgov, Bishop Paisius of Shchigry & Manturovo, Bishop Nicholas, and clergy of the Diocese of Kursk and visiting clerics.

Upon completion of the moleben, Metropolitan Herman welcomed the delegation from the Russian Church Abroad, as well as all of the faithful who had gathered to greet the wonderworking 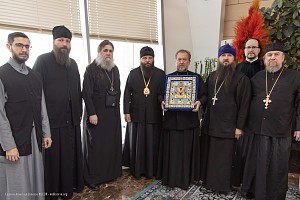