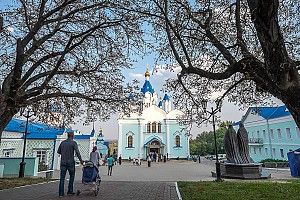 From Saturday, September 22, to Wednesday, October 3, 2018 a delegation of the Russian Church Aboard, led by His Grace, Eastern American Diocesan vicar Bishop Nicholas of Manhattan, visited the Diocese of Kursk with the wonderworking Kursk Root Icon of the Mother of God. Delegation participants shared their impressions with journalist Nina Stavitskaya.

Bishop Nicholas of Manhattan – Vicar of the Eastern American Diocese of the Russian Orthodox Church Outside of Russia, Guardian of the Kursk Root Icon of the Mother of God "of the Sign."

– Your Grace, you were appointed guardian of the wonderworking icon, which has become the Protectress of the Russian Diaspora, and you have accompanied it on trips to Russia, Ukraine, Kazakhstan…

– Let me add: California, Hawaii, and Canada. I went with the icon to Japan, when we served at St. Nicholas "Nikolai-Do" Cathedral in Tokyo, and visited the grave of the Holy Hierarch Nicholas of Japan. (It was very moving that the great saint was born in the Smolensk governorate, and by God’s Providence sowed the seeds of the Orthodox Faith in distant Japan.) I think that not one icon has ever traveled so much throughout the world as the Kursk-Root Icon has. Her mission it to visit every place where Russians live. The icon visits not only Orthodox churches, but hospitals and homes to visit the bedridden.

By God’s grace, I have now visited Kursk and the Kursk Root Hermitage of the Nativity of the Most Holy Mother of God several times. It is not lost on me that this is the historic homeland of the icon whose guardian I was appointed in late 2010, where according to tradition, in the year 1295, on the feast day of the Nativity of the Mother of God, the icon was miraculously discovered… If you were to ask me my impressions of the monastery, I would note the following: every time I come here, I rejoice that good brethren labor here, that their fervent prayers are lifted up to Heaven. Some of the monks I still remember from my trips here as a deacon: as the cell attendant of Metropolitan Laurus of Eastern America & New York of blessed memory, I accompanied him on his pilgrimages. Contact with the residents of the renowned Russian monastery gives me spiritual strength in the monastic life and helps me sense the sanctity of this place. During my visits to Kursk, I try to celebrate Divine Liturgy on a daily basis whenever possible.

– During this visit, you were joined by His Grace Bishop Irenæus of Orsk & Gay in performing all-night vigil at the Kursk Root Hermitage, later at Zolotukhino Convent of St Alexei, Man of God. He flew in especially from Orenburg for the opportunity to pray before the wonderworking icon, which last year visited Orenburg Metropolitanate in the southern Urals. For Bishop Irenæus, the visit of the Icon of the Mother of God "of the Sign" and meeting you was a spiritually edifying event.

– In 2017, right after visiting the Kursk Diocese, the icon went to Orenburg. There, in the southern Urals, as is the case here in the historic homeland of the holy image and in many other places in Russia, people came day and night in a constant stream to venerate Her, to pray before the image and ask the Mother of God for all that is needed for their souls. This I will never forget.

Archpriest Seraphim Chemodakov – Cleric of St. Alexander Nevsky Diocesan Cathedral in Howell, NJ, member of the delegation of the Russian Orthodox Church Outside of Russia.

– Fr. Seraphim, what were your impressions of the trip to Russia? When you arrive back home, do you intend to share your thoughts with your flock?

– This is the first time I accompanied the wonderworking icon and was astounded when I saw such all-encompassing love for the holy icon. In America, the people are either too busy to greet the icon in the way it was greeted here, or else there has been some cooling of faith because of the demands of daily life. Here, thousands of people are ready to stand in line for hours at a time for the opportunity to venerate the wonderworking icon. In addition to the masses, I was amazed at the age groups: there were many in their senior years with walking sticks. But so many young people came, young couples with their children! During my shift watching the icon, I saw the eyes of the people; there were no disinterested people or blank expressions. I discerned faith, hope in the Mother of God, the Deliverer from sorrows, and love for her. It was unforgettable.

– The head of your delegation, Bishop Nicholas of Manhattan, said the same thing. What was most memorable at the Kursk Root Hermitage?

– A great deal. The beautiful cathedral, the orderly monastic services, the immaculate grounds, the goodwill of the brethren and laborers, the many pilgrims. I had an interesting moment: I was walking down toward the cathedral, turned a bit to the right and saw a monument that hit very close to home. I knew that there are three monuments in the world erected to our great contemporaries, thanks to whom the division within the Russian Orthodox Church was overcome, the division that began during the Revolution and Civil War. These were His Holiness Alexey II, Patriarch of Moscow & All Russia, and Metropolitan Laurus of Eastern America & New York, both of blessed memory. I had known about it, but forgotten. Suddenly, I saw it and was thrilled. One of these monuments is at St. Alexander Nevsky Diocesan Cathedral in Howell, NJ. The base bears the inscription saying it is "a gift to the Russian Diaspora from the people of Orthodox Russia."

At the Kursk Root Monastery, according to its deputy abbot, Fr. Seraphim, the monument was erected a few months earlier, in October 2015. The third of the "Reunification" sculpture series, dedicated to the signing of the Act of Canonical Communion between the Russian Orthodox Church and the Russian Orthodox Church Outside of Russia, was erected near Christ the Savior Cathedral in Moscow last summer.

I would like to share another joyful moment; Fr. Paul Wolkow, a member of our delegation, and I descended the long staircase to the holy wellsprings, where we immersed ourselves, and I was struck by a thought: Prochorus Moshnin once lived and prayed here – the future Venerable Seraphim of Sarov! At the age of ten, he was miraculously healed by this wonderworking icon, which we just brought from America. My parents named me, their eldest son, in honor of Father Seraphim, and in those moments, I clearly sensed his presence next to me. In an instant, all of the events of recent days blended into one.

– Father Protodeacon, what can you add to Fr. Seraphim’s words?

– First of all, let me tell you a bit about our life in America. Our parents who arrived there in the 1950s reared us to be proud to be Russian. Fr. Seraphim’s father has been a clergyman at an Orthodox parish in Australia for over 40 years. Fr. Seraphim’s uncle is a monk – Archbishop Gabriel of Montreal & Canada. On my mother’s side, there were many eminent archpriests and protodeacons who were imprisoned in the Soviet Union. I say this in order to demonstrate that our parents taught us adherence to the Orthodox Faith, love for our historic Homeland and the rich Russian tongue. They gave us a great deal. We took the baton, as it were, and try to pass it on to our children and grandchildren, but of course is not easy these days. But let’s imagine how hard it was for our émigrés living abroad, where every Russian was seen as a communist!

Still, the Faith, which always bound together our people, helped the refugees endure. Wherever Russians settled, they opened churches, Russian schools. From the history of our own St. Seraphim Church, I know that in the 1950s, ten families raised a thousand dollars (that was a lot for émigré refugees) and bought a parcel of land. The priest at the time was 92 years old: Fr. Daniel Dumsky, who was born in Russia under Emperor Alexander II. He died at 102… In order to build a church on that parcel, the parishioners visited garbage dumps, looking for boards, nails, other building materials. They lived with the spirit of their prerevolutionary Homeland, and I think that their prayers were stronger than those of succeeding generations.

And it was important that this Orthodox Faith not be interrupted, that it set deep roots in this faraway continent.

The trip to Russia with the icon has left an indelible impression on my soul, which I will share with my parishioners.